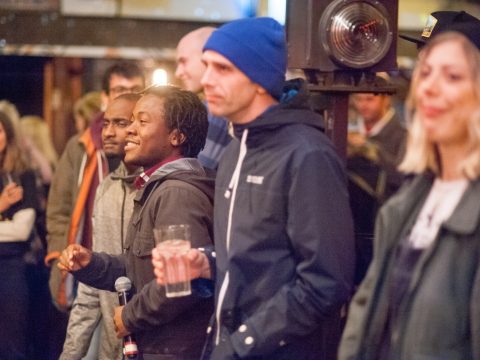 In August this year a guest editor of the @Ireland Twitter account received a barrage of racist and sexist abuse. Michelle Marie, a black woman describing herself as a mum and model, came under attack from Twitter trolls who launched the usual sexist, racist and fattist abuse (how sad that we’ve come to expect such an onslaught simply for being black or a woman or anything but size zero), but with the added accusation of ‘not being Irish enough’ to represent the community Twitter account.

Originally from Oxford, Michelle was told by one Twitter user to ‘return to her ancestral lands’. Let’s assume that particular tweeter wasn’t one of the 6,638 Brits to apply for an Irish passport in the wake of Brexit*. Another found it ‘insulting’ that someone ‘not genetically Irish’ could dare to represent the nation. Presumably that individual is unfamiliar with ‘The Granny Rule’ which has kept the Irish football team in operation since the 60s!

Thankfully not all responses were so detestable. Darragh Doyle, who manages the @ Ireland account, hosting a different guest editor each week, said that most replies to Michelle’s tweets, “particularly from Ireland or Irish people, condemned the racist, sexist, vile tweets” and voiced their support. So the question remains: if the majority of Ireland and the Irish Diaspora can welcome and celebrate the Irishness of a black woman born elsewhere, why did the rest of world have such an issue with Michelle Marie, a black, English woman who’s taken up residency in Ireland?

Would they take the same offence at an act such as the Rusangano Family representing Irish culture here in Liverpool? Comprising of a Togolese MC, a Zimbabwaean rapper and Irish producer, the hip hop, electronic outfit were standout performers at last year’s Liverpool Irish Festival, bounding up and down the Kazimier Garden stage with an explosive energy that matched the sheer vigour and tenacity of their lyrics. Their performance broke all stereotypes of Ireland’s traditional ‘diddly-a’ music (as ‘me Da’ calls it) and was like no other act to have graced the Liverpool Irish Festival before.

The beauty of this festival – and of Irish culture in general – is that there’s enough room on the stage for whimsical Irish poetry and hip hop, for contemporary art and traditional dance. The threads of our national fabric have stretched so far beyond our own shores, it seems new exotic strands are beginning to reach back from far afield and become entwined with the traditional hues and patterns of Irish heritage.
Ireland’s greatest export has always been its people, thanks to a steady stream of emigration. The greatest cities of the world were built with Irish émigrés sweat. Our culture has been woven into the fabric of everywhere we’ve travelled over the centuries. There are more Irish people living outside of Ireland (44m) than in it (4m). We could and should never be a nation to close its borders or question the right of anyone to make a home and future for themselves in a land not theirs by birth.

And with such a constant stream of people leaving the country and bringing our culture to the far-flung corners of the world, it’s refreshing to see that the Celtic Tiger (Ireland’s economy), membership of the EU and controversial tax breaks for global companies has done something to turn the tide. That Ireland at home reflects the same diversity as Ireland abroad is surely a sign of real progress, at a time when the rest of the world is closing borders and putting up walls?

As a schoolgirl in Dublin I studied Irish sat next to a refugee from Somalia; as a teenager in Tyrone I played Gaelic football against girls from Nigeria and now, here in Liverpool, I am constantly met by second, third and even fourth generation Irish who still raise their glass with a “Sláinte”.

Just this summer past I attended the glorious Africa Day Festival in Dublin’s Phoenix Park and salivated over the delicious smells, admired the beautiful crafts, delighted in the bright bold colours of the traditional garments and shook my very white (or lobster red by that point!) shoulders to the Afro beat. That same night I went to a packed out Croke Park and listened to Bruce Springsteen sing songs rooted in the traditions of Irish folk music and recall stories about his own Irish granny.
I wonder if the trolls who attacked Michelle Marie would be as quick to deny the Boss his Irish identity?

Emma Walsh
Writer, blogger and active feminist. Half Dublin-jackeen, half Tyrone-culchie, Emma moved to Liverpool to study English Literature and Irish Studies at the University of Liverpool and now works at The Reader.

* An estimated 6m Briton’s have Irish ancestry that would – by law – permit them Irish nationality. Post-Brexit, Ireland’s foreign minister Charlie Flanagan asked for the surge in applications to cease, stating “increased interest clearly points to a sense of concern among some UK passport holders that the rights they enjoy as EU citizens are about to abruptly end. I want to state clearly that this is not the case”.