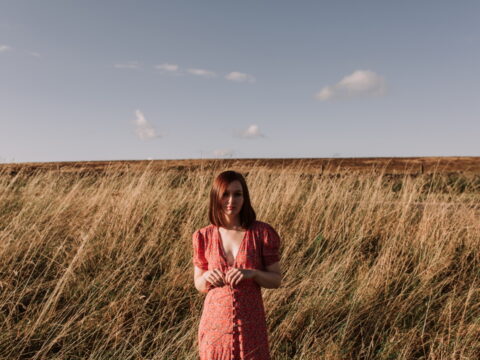 We met Maz O’Connor in 2018 when we began discussions with her about being part of our In:Visible Women programme in 2019.

Featuring as one of the guest performers at our Visible Women night at the Liverpool Philharmonic, Maz’s gentle demeanour belies her determination, drive and tenacity. Maz is proof that femininity can be strong, skilled and intelligent; urgent, driven and cutting. It seems these are also aspects of the world she relishes in…

In 1895, in a township called Ballyvadlea, near Clonmel, Co. Tipperary, Bridget Cleary was burned to death by her husband, while her family watched. They believed her to be a fairy changeling: a creature that looked and spoke just like Bridget, but was in fact a sinister substitute bringing decay to the community. The family thought that if they could chase the changeling out with fairy potions and, eventually, fire, then the real Bridget would return to them. They buried her charred remains in a shallow, unmarked grave and awaited her return. Of course, it never arrived. She was twenty-six years old.

I came across Bridget’s story in 2017 when I was approached by The Finborough Theatre to write a piece of music theatre. I’ve worked in theatre as a musician, with the Royal Shakespeare Company and with Liverpool playwright Lizzie Nunnery, and it had long been an ambition of mine to write something for theatre myself. As a singer-songwriter, I sometimes find the form I work in to be limiting. I was itching to tell a story in a longer form, as well as write for voices other than my own. After encouragement from The Finborough, I began looking around for a story to adapt. My two requirements were firstly, to find a story that suited my style of music and, secondly, to find a world in which singing was a part of everyday life. Of course, I thought of Ireland. My own experience is that an Irish family event isn’t over until somebody sings and I was excited to tell a story through traditional Irish music; not the Disneyfied version, but the dark, strange beauty of the real thing.

Bridget’s story hit me like a train. Not only was I moved by the contemporary resonances with so-called honour killings and FGM, I was intrigued by the connection between superstition, Catholicism and patriarchy and how all of these forces work together to oppress, and even kill, women. Very quickly I could hear music. I had ideas for how I wanted to musically express the idea of the fairies, her husband’s mania, violence and mass hysteria. Music is abstract; it takes us out of our everyday life, our everyday language and into a more intense, metaphorical space. It’s in this space that I felt, instinctively, that the story of Bridget Cleary would have the most impact.

About a year after I started writing the piece, I realised that I needed to take a research trip to Tipperary. I was surprised to discover that Bridget’s home was only an hour’s drive from my cousin’s farm in Co. Waterford. I spent a week exploring the area, talking to locals and searching for clues about who Bridget was, wondering how the landscape might have influenced both her and the culture that killed her. My cousin kindly drove me to all the fairy rings that he knew of. He waited in the car while I bravely marched across the threshold and into the centre of each perfect circle of trees. I wasn’t sure whether or not he was joking when he said that there was no way he’d step foot inside one himself. I closed my eyes and tried to hear what Bridget might have heard in 1895 when she took one of her frequent trips to the fairy ring near Ballyvadlea. I was struck by how alone I felt, and how easy it might be to believe that there was some supernatural force inside those forts. More than once that week I spooked myself into believing that the fairies, or the spirits of Bridget and her husband, were haunting me. Luckily, I made it back to London unscathed, more committed to the project than I had been when I’d left.

Three drafts of the piece later, I felt that I could go no further alone. I needed to collaborate. I applied to Britten Pears Arts for a week’s residency with them in Snape, Suffolk, working with a small group of musicians and actor/singers. It was an incredibly inspiring week, and the reaction from the group, and from Britten Pears Arts, told me that we definitely had something. I came away with a recording of five songs from the piece, giving a sense of the style of the music. I sent the recordings to theatres and the feedback I received was that I should get a book writer involved. Musical theatre has three elements: the music, the lyrics and the book (or script). Sometimes all three are written by the same person, as in Hamilton (Lin-Manuel Miranda) or Hadestown (Anais Mitchell), but commonly several artists collaborate across the elements. The piece, as it was, was around ninety percent sung through, but there were a few connecting scenes of dialogue needed. And that’s where the Liverpool Irish Festival came in.

I sent the recordings to Emma Smith (Festival Director), to ask if the festival might be interested in developing the piece in some way, given our existing relationship, the style of the music, and the cultural relevance of the story. Emma was enthused by the idea, and offered to help me put together a brief to recruit a book writer, as well as sharing expertise in how to manage an arts project. Up until that point, early 2020, I had been working entirely alone as composer, lyricist and producer, so it was a great relief to receive some help, even just in the form of regular conversations about the project.

And so, thanks to the help of the Liverpool Irish Festival and a £2,000 Alan James Bursary from the English Folk Dance and Song Society, I have used this lockdown period to collaborate with Irish writer Alan Flanagan. He encouraged me to write the scenes myself, supporting me as a dramaturg. In September—COVID-willing—I will be returning to Britten Pears Arts in Snape for another residency as part of their Festival of New, along with Alan, director Tinuke Craig, movement director Martin Bassindale, six actor/singers and two musicians, to workshop what we have and get the first half hour on its feet. The plan is to have a full production to be performed at the Liverpool Irish Festival in October 2021. That’s if the fairies don’t get in the way.

The Festival sincerely hopes to bring Maz’s full production to Liverpool for #LIF2021 as part of our ongoing commitment to In:Visible Women. Bridget’s story, sadly, is one that continues to chime the world over, with murderous practices and the misuse of education versus folklore commonly centred used to the subjugate and diminish women. In supporting this piece, we not only hear a potent story for our times, but support conversations for equity and a brilliant artist progress her creative vision. Look out for this: it will be remarkable.