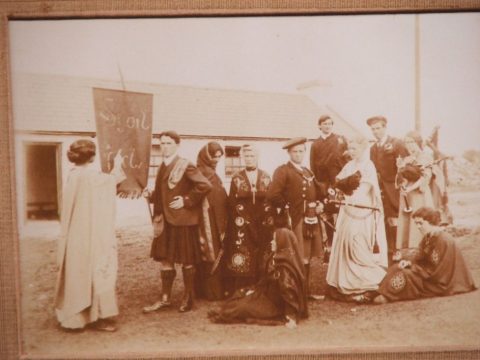 A Liverpool writer will explain, in a lecture in Central Library on 17 Oct, how one of the British army’s most celebrated World War One heroes had a cousin who participated in the Easter Rising.

Oxford-born Noel Chavasse ( 1884-1917) was the only British soldier awarded the Victoria Cross twice in the First World War. A member of the Royal Army Medical Corps, he died of injuries received in the Battle of Ypres in August 1917. His cousin, Claude Chavasse ( 1886-1971) also Oxford-born, was one of the Irish nationalists rounded up by the British Army in 1916 in the aftermath of the Easter Rising.

Noel Chavasse moved to Liverpool aged 16 when his father, Rev. Francis Chavasse, was appointed as Anglican bishop of the city, living in the Bishop’s Palace, Abercromby Square. Regarded as the city’s most famous war hero, Noel Chavasse is commemorated in Liverpool with a park (near the Pier Head) bearing his name.  A large sculpture of Noel Chavasse,  made by local artist Tom Murphy, was unveiled in Abercromby Square in 2008, perhaps coincidentally, it is directly outside the University of Liverpool Institute of Irish Studies.

The exploits of Noel’s  cousin, Claude, are largely unknown in Liverpool, whereas in Ireland he achieved almost celebrity status, indeed – Brendan Behan is believed to have based the character ‘Monsewer’ in his play The Hostage on Claude Chavasse.

Claude first came to the attention of the authorities when he gave his name in Irish when stopped by a police sergeant in County Cork in February 1916. As the law stated that English had to be used when questioned by the police, Chavasse was arrested and spent two nights in Macroom Prison, where he alleged he was beaten for refusing to speak English. His relationship with the Bishop of Liverpool was mentioned when he appeared in court, but this was not enough to save him from being found guilty and fined £5.00. When he refused to pay he was sentenced to a month in prison.

The name Claude Chavasse then appears amongst those who were arrested by the British Army in the wake of the Easter Rising. He was held in prison for several days before being released without charge. He was then active in the War of Independence, during which he was again imprisoned and took part in a hunger strike. Chavasse took the Republican side in the civil war which followed. He was elected as the Sinn Féin representative for Galway at the organisation’s AGM in 1949 and remained active in the Irish language movement until his death in 1971

The Chavasse family was a very close one – Noel was engaged to another cousin, Gladys Chavasse at the time of his death in Belgium- so they would have been well-aware that Claude Chavasse, who was just two years younger than Noel, had supported the rebels against the British Army in Ireland.

“It was one of those unusual twists of history, to have two members of an upper-class English family serving abroad for the ‘freedom of small nations’ – one in the British Army in Belgium and one supporting the Irish nationalists fighting the British Army  in Dublin,” commented Tony Birtill.

Tony Birtill is a Liverpool-based freelance journalist and writer. He contributes regularly to the Irish Post newspaper and Irish language television and radio . He is author of A Hidden History : The Irish Language in Liverpool ( 2013) and teaches the Irish Language at St Michael’s Irish Centre, Liverpool. He is a member of the National Union of Journalists.

Picture courtesy of www.scoilacla.ie Claude Chavasse is pictured in the kilt.

In my Liverpool home
The official #LIF2016 playlist