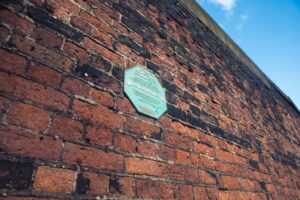 Clarence Dock is situated in the Northern Docks system, linked to the River Mersey. There are two main sets of gates. Clarence Dock’s gates are not themselves a postal address, therefore the next best address has been sought, using the building opposite. Of the two sets of gates to Clarence Dock, visitors should approach the ones closest to the town centre.

The dock was designed by Jesse Hartley and named after the Duke of Clarence, who later became William IV. Opened 16 Sept 1830, Clarence Dock was a self-contained steamship facility, originally built for transporting goods along the Leeds-Liverpool canal. It later became the main berthing dock for Irish steamers until 1929, when it was infilled and redeveloped as a power station, which was demolished in 1994.

In the 1840s Clarence Dock transformed from being a goods dock to a gateway for Irish steamers. With so much shipping between Ireland and the British mainland, the cost and conditions of travel varied greatly between ships. Sometimes passengers’ accommodation became subordinate to the interests of livestock. The practice of selling cheap sailing tickets to Irish migrants -and the issue of overcrowding on the ships- attracted considerable criticism. A report by a Government-appointed committee of enquiry, headed by Vice Admiral Sir Henry Mangles Denham (1800–1887), recommended restrictions on the number of passengers ships could carry. Responding to the report Liverpool MP, Edward Cardwell told the House: “…there were accounts of people crowding between the cattle for the sake of animal warmth, amidst a floating mass of salt water and animal excrement”. The testimony of police constables reported they had seen people frozen to death on ships’ decks.

It was through Clarence Dock gates that most of the 1.3 million Irish Famine migrants fled. Some of these migrants settled in Liverpool, with others setting passage to other British towns and cities or crossing the ocean to start new lives in America, Canada, Australia and New Zealand.

During the mid-nineteenth century the Mersey estuary was full of ships, from all over the world, with hundreds departing from and arriving into the docks every day. Some vessels anchored in the river, with small boats ferrying people to and from the shore. The tidal current could be as fast as five knots and collisions between ships were not uncommon. Newspaper reports from the period provide vivid and horrifying accounts of such collisions.

One such incident, occurring due to the heavy traffic on the river, was reported in the Cardiff Newspaper, 30 May 1846. It describes a collision between two Irish steamers, The Sea Nymph and The Rambler, on the River Mersey.

The Sea Nymph left Clarence Dock at around 10pm with about 50 passengers. The Rambler, which had sailed from Sligo with about 250 passengers and livestock on board, entered the river. The vessels collided, killing and wounding many of the passengers both above and below deck on The Rambler. Several passengers who jumped overboard to swim ashore drowned, while others lost their lives falling into the river as they attempted to reach the lifeboat. The deck was overrun with pigs and cattle, causing great confusion that led to some children being trampled to death. None of the passengers on The Sea Nymph sustained any injuries.

An inquest into the collision noted just six bodies from the 13 recovered were identifiable. They were: Bridget Fury, Owen Fury, Margaret Ford, Bridget Ford, Patrick Charles O’Mealey and James Lally. The jury at the inquest into the disaster found the deaths to be ‘accidental’ and fined the owners of The Sea Nymph £500 (£62,000 today). The Sligo Champion, commenting on the verdict (20 Jun 1846) stated “the amount of the loss of life was never properly ascertained”.