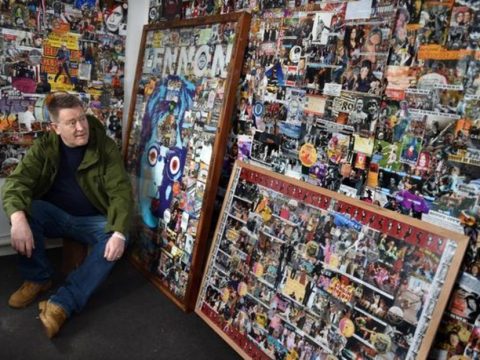 Liverpool based artist Philip Hayes has a collage exhibition in Unit 51 at, Baltic Creative, running from 28 November-9 December 2016. In this article we celebrate his links with the Liverpool Irish Festival and look at his use of collage to develop his thinking and help with his fight for wellbeing.

Philip Hayes, a leading Liverpool music figure and former founder of the Picket, a much missed music venue. In recent weeks, he has been telling us how he has used the power of art to bring his life back on track. We also know Philip as one of the co-founders of the Liverpool Irish Festival who helped to bring the festival to life, so what has this journey meant?

“I helped set up the Liverpool Irish Festival with John Chandler (ongoing Chair of the Liverpool Irish Festival) in 2003; it just seemed so obvious an idea to do this thing here. I commissioned a mural – working with the Liverpool Mural Project, which was painted on the exterior of my venue the Picket, celebrating the links between Liverpool and Ireland[. This] was sadly painted over [in] black whilst I was in hospital in 2013, an act of cultural vandalism, in my opinion. Today it is not visible, but may reappear once the elements have their way”.

He is aware of Irishness running throughout his work and particularly of how the sound of our voices has changed due to the unique relationship between Liverpool and Ireland and how this has impacted on the accent, music and creative output of the city. In Philip’s understanding, the rise of the Irish communities in the city transformed post-1840’s from Lancastrian into Scouse, from a plain monotone accent to a lyrical, lively and dynamic sound.

He wants to ensure that we do not forget how we got our sound and to acknowledge the Irish presence that has impacted the identity of Scousers in the city. His work depicts aspects of Ireland that come through because of the people he has worked with. Artists such as Elvis Costello (real name Declan Patrick McManus), George Harrison (a Beatle with Irish cousins), and Paul McCartney and John Lennon with direct Irish descent. Hayes says “my work would not be telling the true story of Liverpool musicians, without acknowledging the Irish presence and impact on the identity of Scousers”.

One of Hayes’s project is to create an album to raise funds to help support people who have minor and severe learning difficulties. He has booked recording studios and aims to get two or three songs recorded. He is also in talks with key music figures in Liverpool to expand the project, including David Pichillingi Liverpool Sound City; Kevin McManus, Curator at the British Museum of Popular Music (formerly of Liverpool Vision) and Chris Meehan, Sentric Music, publishing specialists to get the project off the ground.

Philip took to creating collages to help him with issues he was suffering with back in 2013, finding expression through their creation and using them to calm him once they had been produced, finding solace in the stories each of them told.

To help him get through his time spent at the different clinics he would ask staff to let him have his collages and they let him fill a room with them. Hayes used art as a way of focussing  his recovery time, helping him get to where he is now. One of his favourites is the Lennon collage, which he describes as “instantly recognisable as being all about him”. The album John Lennon/Plastic Ono Band, has been used by Hayes in his own therapy, in which he also adopted primal scream therapy to help him recover.

Hayes went under mental health treatment between 2013 and 2015. “When I went into Windsor House I was very ill. But I want people to know there is a way out when you find yourself in such a desperate situation – I am the proof of that and I’m thinking of writing my autobiography and calling it From Crocky To Tocky Via Hell In A Handcart”.

A collage called Good Samaritans, contains 3D objects and he would like to use this artwork to go along with the studio album mentioned above. The album aims to remove the stigma around mental health and raise funds for the Samaritans and other organisations, including SAFE in Bootle and the Belve (Belvedere Youth and Community Activity Centre) in Toxteth.

Liverpool Irish Festival would like to thank Rebecca for the work she has done in creating this article and for her internship support. Thank you!