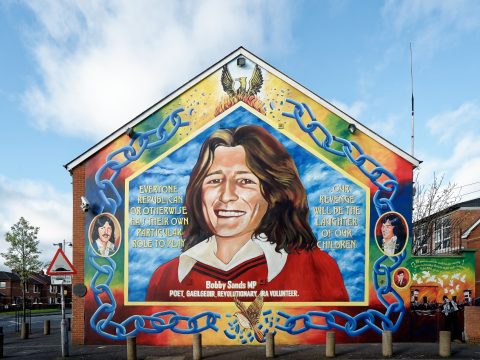 The harrowing stories of hunger strikes in 1981, pitting Irish political prisoners against the weight of Whitehall and the British Government, are well known. However, the stories, decisions and personalities that generated these actions are less clear. In this article, Stuart Borthwick helps us understand the process that drove these hunger strikers, providing 66 Days viewers with a context for Bobby Sands’ actions and those of his counterparts. This is a must read for anyone thinking of attending the film screening or those interested in the ongoing politics of Ireland.

Most people know about the hunger strikes in the H-Blocks of HMP Maze, south of Belfast, in 1981. Ten men died as part of a campaign for political status for prisoners convicted of offences during ‘the Troubles’. Yet despite the release of three feature films on the subject (Brian Campbell and Laurence McKeown’s H3 released in 2001, Steve McQueen’s Hunger in 2008 and now Brendan J Byrne’s 66 Days), the origins of the dispute are rarely discussed, even if the consequences of the strike are well known.

In March 1972, after a few short years of increasingly fierce armed conflict and 328 violent deaths, the Conservative government in London announced the abolition of the Parliament of Northern Ireland and the imposition of ‘direct rule’ by the Westminster government, to be overseen by a new cabinet position of Secretary of State for Northern Ireland. William Whitelaw, the first incumbent in post, soon recognised that those fighting on the streets of Belfast, Derry and elsewhere were not criminals or looters, but politically motivated combatants. This was not a series of riots, or even a mere insurrection – this was approaching a civil war. Within three months of taking up post, there was a truce and Whitelaw engaged in face-to-face meetings with the leaders of the IRA. A truce, not merely an IRA ceasefire. Strange to conceive in the light of subsequent speeches by successive prime ministers, but true nonetheless. One of Margaret Thatcher’s closest confidantes did not merely ‘talk to terrorists’, but negotiated a truce with them.

An IRA precondition for meeting with Whitelaw was the creation of “Special Category Status” within the prison network. This precondition was readily granted by the British, bringing to an end an IRA hunger strike in Crumlin Road jail that was calling for political status for prisoners. All prisoners convicted of “scheduled offences” would henceforth be treated as de facto prisoners of war, wearing their own clothes, refraining from prison work, associating freely amongst themselves, and receiving food parcels and visitors from the outside. Prisoners also received 50% remission on their sentences and paramilitary structures were accepted by the British authorities, with governors and warders liaising with paramilitary organisations in the running of prisons.

The truce broke down immediately after it became clear that there was no British plan for withdrawal from Northern Ireland (a key IRA demand). However, Special Category Status remained a legacy of the truce until the subsequent Labour government seemingly decided that their Conservative predecessors were ‘soft on terrorism’. In 1976, Merlyn Rees, Labour’s new Secretary of State, announced that Special Category Status was to be phased out. A new prison was to be built to house the newly convicted, who would be treated as criminals. IRA volunteer Kieran Nugent was the first to be convicted under the new system, who when presented with a prison uniform refused to wear it, informing prison warders that they would have to nail it to his back.

And thus began the prison protest that led to the hunger strike of 1981, as depicted in the film 66 Days, which has a special screening at FACT as part of the Liverpool Irish Festival. The hunger strike led to the deaths of Bobby Sands and nine other IRA and INLA prisoners, and was ended when the families of those still on hunger strike intervened to request that their next-of-kin be fed should they become unconscious.

Shortly after the hunger strike collapsed, the authorities conceded special category status in all but name, with prisoners receiving 50% remission from their sentences, wearing their own clothes, and associating with each other. They could never quite openly admit it, but “crime” was no longer “crime” and these prisoners were different. But the pretence of a criminalisation policy remained intact and the next Prime Minister, John Major, retained a hard line towards Republican prisoners, announcing to the House of Commons that it would ‘turn his stomach’ to negotiate with the IRA. The reality was different. The British state had never really stopped ‘talking to terrorists’ since Whitelaw negotiated with the IRA in 1972. It was this talking, often conducted at arm’s length and in secret by the security services and the IRA, that led to a peace process and the subsequent release of all Republican prisoners by 2000.

Stuart Borthwick’s book “The Writing on the Wall: A Visual History of Northern Ireland’s Troubles” was launched at the Liverpool Irish Festival in 2015 and is available for sale from News from Nowhere on Bold Street.

Liverpool Irish Festival would like to thank Stuart Borthwick for preparing this article, exclusively for our site and audiences. We encourage people to attend the screening of 66 Days (105 ons, Cert. 15) and hope that this information offers a broad account of how these strikes came to pass.

A spotlight on Liverpool Irish theatre
A Thread of Irishness