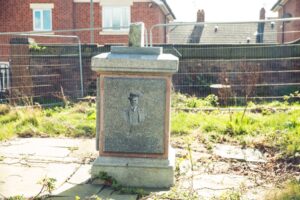 Originally a fountain of red Aberdeen granite, this memorial statue was erected to the legendary ‘Dandy Pat’ in 1892, and located outside of the Morning Star Hotel (Scotland Place). Due to development involving road widening the monument was re-located to Pownall Square, where it was badly vandalised and subsequently moved to a Corporation Yard only to then disappear. The base of the fountain turned up in the late nineties after an appeal by The Scottie Press Community Newspaper. The original inscription remains on the monument and reads:

“Erected in Memory of Patrick Byrne City Councillor who was distinguished for his services to the Ratepayers, benefactions to the Poor, and ardent love of his Native Land died 5th May 1890 ~interred at Ferns, Co Wexford.”

The rediscovered memorial was unveiled by the Lord Mayor of Liverpool, Councillor Joe Devaney at St Anthony’s Church, Scotland Road with kind permission from Canon Tom Williams on 14 April 2000.

Liverpool is full of characters, eccentrics and dynamic personalities. A standout in the pages of history was man of the people, Councillor Patrick Byrne, ‘Dandy Pat’. Originally born in Tinneshrule, County Wexford in 1845, Pat was a driven man with a strong work ethic, holding down various forms of employment, including thatching, farming and stonemasonry. Pat came to Liverpool aged 17, working for three years as a dock labourer. Frugally saving his income, Pat eventually opened a small lodging house, The Tichfield, in Tichfield Street, Vauxhall. Being immersed in a poor area attuned Pat to the needs of the people and his shrewd business mind helped him to shape a stable and secure business model. His kindness gained Pat great popularity and he became a well-respected and beloved member of the community.

Pat always stood out from the crowd. His signature outfit was a sealskin coat and white hat. It was this eccentric dress sense that earned him the nickname ‘Dandy Pat.’

In 1876 he became the proprietor of what would become his flagship the Morning Star Hotel, Scotland Place, Byrom Street. The courts, where people lived, lacked basic amenities. Pat created establishments that provided a warm, cosy welcome to customers. He recognised that people were not there solely for alcohol, noting they needed something more. Thus, Pat installed billiard tables and organised competitions to create a congenial atmosphere and sense of community. His public house was a type of relieving house for the poor of the district.

As with Agnes Jones, ‘Dandy Pat’ is less recognised for a connection with The Irish Famine and more for his Irish connections and development of working-class provisions for Irish people in Liverpool. This said, there is no doubt, that as someone working within working-class communities in Vauxhall, Pat’s world would have been full of Irish migrants and the effects of The Great Hunger would have coursed through the community he served. His political savvy, generosity of thought and ability to translate relieving services in to business chimes with other welfare and social activists of his time, much of which surfaces as a result of Poor Law reform resulting from the needs of the Irish people, following the An Gorta Mór.

‘Dandy Pat’ became a trusted voice and served the interests of the people. When he turned to politics, he was outspoken, forthright and did not worry about causing offence. As Councillor for the Vauxhall Ward, he was an advocate of the working-class poor. The Liverpool Review wrote:

“Patrick lived in the midst of the people and took care more than once to remind colleagues in the Council who treated his speeches with some amount of derision, that he knew what was desired better than men of great wealth and high position living in the comparative retirement of our parks or perhaps further afield, where the cry of suffering humanity was never heard. There was the true ring of sincerity about all he said, and how could more point be given to this assertion than by remembering the practical way he set about relieving poor people, at one period of the year at any rate, by the provision of Christmas cheer. Many a time had he undertaken the thankless task of harassing the powers that be, in the conduct of municipal affairs in order that some obscure widow of a street cleaner should receive the full allowance from the Corporation on the death of her husband.”