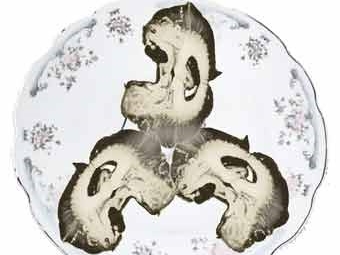 The Domestic Godless (Stephen Brandes, Irene Murphy, Mick O’Shea) have been together since 2003. Since then, it has been their mission to explore the potential of food (its taste, presentation, history and cultural values) as a vehicle for irreverent artistic endeavour and experimentation. Through recipes, installations and public presentations The Domestic Godless employ food as both a concept and a medium through which to convey humour, empathy and other qualities that distinguish art from purely craft. In support of their upcoming book the Liverpool Irish Festival present you with a short extract and encourage you to consider supporting their Fund it page for the publication of their first book The Food, the Bad and the Ugly.

Below is the recipe that Stephen has provided for your delectation. NB: The Liverpool Irish Festival neither supports or condones the breeding or adoption of Giant Snails (of any origin) for the purposes of fulfilling the forthcoming recipe. Intrigued? Read on!

Ireland has changed remarkably over the past 30 years. While it often looks soul-searchingly inwards, it looks outwards too… westwards to the USA; eastwards and southwards to Europe and beyond as its cultural influence and absorption gets richer and richer.

The travelling Irish experience new cuisines and broaden their tastes. Global ingredients now occupy shelves in our shops. The past 30 years have seen people arrive to these shores from all over the world, settling and bringing their foods and techniques along with them…

This island has woken to the realization that it has a spectacular larder in its fields, its hedgerows, its seas and its woodlands and Ireland is producing world-class chefs who know how to use it.

At this point I must explain that we are The Domestic Godless, a thorn in the foot of Irish gastronomy, with an irreverent disregard for current fashions and trends; a culinary Golem. We have researched the darkest corners of the world’s culinary cultures to create recipes that teeter on the edge of feasibility and believability. Here’s one…

We admit that this has to be one of our strangest recipes yet and possibly not to everyone’s taste. The size of a farm-worker’s fist, the African Land Snail had been a much favoured dish by [Irish] missionaries and their converts on the African continent as a Lenten supper. First introduced to Carrigaline in County Cork, in 1878 by Fr. Ignacius Mulcahy, the gastropod consequently had a devastating effect on the local eco-system, reducing gardens and parkland to wastelands within weeks. During the ‘Emergency’ however, they became a reliable and popular substitute for lamb in stews, which helped manage their control to the point of extinction.

Today, Giant African Land Snails can be purchased from specialist retailers, and indeed bred domestically. They apparently make great pets, but this is discouraged if their purpose is for consumption. We have our own [snails] of course, all bred from the original

Our recipe exploits the fact that snails cannot digest sugar, but will eat it until it brings on anaphylactic shock as the sugar crystalizes in the veins and abdomen of the gastropod.

Firstly feed the snails on sugared almonds for 3-4 weeks. They are ferocious eaters and will go through about 5kg before shock sets in. They will slow down considerably (even for snails) before this happens. One could also just crack them open with a brick, but we want to keep the shell intact.

Now place them in a freezer for about 45 mins.

Remove and slice into 1.5mm – 2mm slivers, shell and all. You will need a circular tile cutter or a jeweller’s fret saw for this.

Lay the frozen slices in baking trays, and pour over a solution of 1 part salt & 2 parts lime juice to 3 parts water. This removes the slime.

Carefully rinse the slices several times with fresh water, finally leaving a small amount behind in each tray. Cover with tin foil and place in the oven to steam for an hour or so. The body (foot) of the snail will shrink slightly in the process. Leave to cool to room temperature.

Normally, in most land snail recipes, the guts and stomach are discarded into a neighbour’s garden, but in this instance, the four week diet of sugared almonds produce within the snail’s vital organs, a sweet paste, not unlike marzipan. 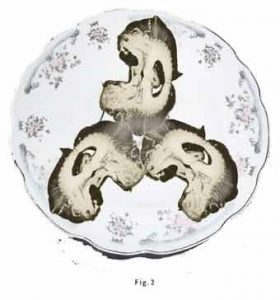 Arrange 3 slices on each plate, as in fig. 2 and remove the coiled shell leaving the meat in place (this can be fiddly). Make a coulis by reducing over a brisk heat 1 cup of fresh pomegranate juice, thinly diced shallots and a little honey. Sprinkle the snail with whole pomegranate seeds and pour over a little of the coulis. Serve at room temperature.

A note from Liverpool Irish Festival:

* ‘Pataphysics is a literary trope devised by Pére Ubu author, Alfred Jarry, who offered a short definition of ‘Pataphysics as being the “science of imaginary solutions”. According to Jarry, the apostrophe used here, in advance of ‘Pataphysics, is always added before the word to avoid a pun in French.

We hope you appreciate a touch of the surreal. At a time of heavy political debate, a touch of light refreshment always helps to clear the palette!

Board Trustee vacancies – can you help?
Shanty-singing and the Irish Atlantic