Written and produced by Lucinda O’Donnell and Harley Mullen

Liverpool John Moores has partnered with Unitemps to produce a Discovery Internship programme for Level 6 graduates. This has provided graduating students with an opportunity to work with local organisations, gaining insight into working life. We were lucky enough to secure internships with the Liverpool Irish Festival, and have been learning about working in the arts.

You can read more about the exhibition and how to visit on our exhibition page, where you can see the presentation.

In the build-up to opening day (6 Jun 2022) we spoke to the collaborators, involved in the curation of the digital show, Andy Kelly from Irish Community Care and Charmaine Abdul-Karim from Pride of Romani. Both had interesting takes on their experiences working in collaboration with each other.

Irish Community Care has been a charity for around 60 years, supporting all Irish and Irish Travelling communities across the north west. Andy Kelly, the charity’s Community Development & Engagement Lead told us: “We provide advice, advocacy, and support (…). That can be anything from benefits queries; Irish passport queries; advice about personal independence payments and disabilities”. Irish Community Care initially birthed the idea for the exhibition. “We also provide cultural activities and ‘moving for change’, for nomadic Gypsies and Travellers, which explains our work with this exhibition”, he added. In his role, working closely with the Gypsy, Romani, Traveller community, Andy has learned more about the challenges presented to nomadic peoples:

“I think that there are a lot of negative tropes in the press surrounding the Gypsy, Romani, Traveller community. Certainly, since I’ve been working within the role that I have, I’ve definitely found that Travellers in particular feel like ‘place invaders’ (…). This community has the same ambitions for their children; [they] go to work every day (…) and yet we continue to be ‘afraid’ of the community and hold our children out of the way if we see them coming (…)”.

In ‘moving for change’ for Gypsies, Romani and Travellers, Andy stressed the importance of changing the existing narrative surrounding the community, which has been largely propagated by negative press, into something more positive. “It’s important to shed light on these stories to change the narrative surrounding the community (…) ‘Educate and illuminate’ is our main objective with this exhibition”.

“Because of the negative stereotypes, and the way the GRT community is treated by the wider public, there [are] barriers […] when trusting people outside of the community”. Expressing gratitude to for their participation, Andy states: “Charmaine has been great to let me work with her and her mum’”.

Charmaine Abdul Karim’s grassroots organisation Pride of Romani launches 24 June 2022. The organisation centres on preserving GRT heritage, and engaging with children in the community, to encourage them to embrace their ethnicity. Charmaine told us “a lot of Gypsy and Travelling children hide their ethnicity (…) I just wanted to do something that empowers our people”.

An important part of Pride of Romani‘s work is partnering with the public sector to educate the wider community; “I call it re-educate. We want to provide information so people can learn more. Sometimes ignorance is through no fault other than not knowing enough. And, people don’t know enough truthful information from the community itself”.

Charmaine found it difficult trying to convince her mother to take part in the exhibition at first. “I first had to get round my Mam; she’s a very private person, she doesn’t like talking to people that are outside of our family and community”. She added that there is a deep reluctance within the community to trust outsiders. Everybody sits and watches on Channel 4 and thinks [it]s hilarious. Whenever people think they’re going to be in the spotlight [there’s] a chance for them to be made fun of. I had to bring my mother kicking and screaming [to] assure her that we can trust Andy”.

Negative press such as Channel 4’s My Big Fat Gypsy Wedding had huge repercussions for the GRT community. “It was people’s har har for 20 minutes. The results […] were that our young girls were being sexually assaulted in the streets […] people thought it was okay to grab hold of them like they’d seen on television. Our husbands, brothers and fathers lost work because people thought that they were some kind of sexual predators”.

Charmaine stressed the importance of ‘re-education’, ‘‘I wish that there was more of what the exhibition is. Showing true representations of GRT communities. Because that would be as fun and brilliant to watch as racist series like the ones on Channel 4”.

Here’s a snippet from our chat with Charmaine:

The feeling we tookaway from our contact with the exhibition and people was that the GRT communities are so much more than we have seen.

The exhibition slides are available as a PDF on the events page. Here you can browse at your own pace, even after the exhibit closes at the Museum. We recommend you take the time to read them, and learn more about this community’s intricate history. 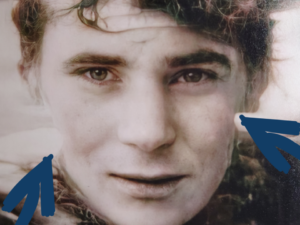 7 June 2022
This website uses cookies to improve your experience. We'll assume you're ok with this, but you can opt-out if you wish. Cookie SettingsAccept
Manage consent