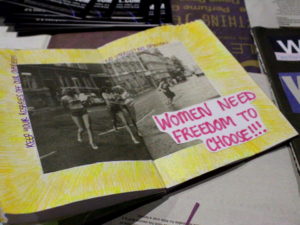 In:Visible Women is a strand of work that we programme in to each Festival. It aims to improve the visibilty of Irish women, playing with the term (Visible/Invisible) to refocus attention where it is most needed.

Ireland is often spoken of as a matricarhal society. This specific misrepresentation is part of an issue for women within society, who have been spoken ‘about’, but rarely ‘to’. Called strong, but removed. These matriarchs -whose body autonomy was so powerful it was forced behind the walls of laundries, constitutional governance and shame- have been veiled, vilified and vanished. We unpick these stories and those of many Irish women who have made a difference, sustained their communties and persevered to take space.

In Ireland -and in Britain- a resurgence in considering identity is happening via the lens of Brexit (and now Covid) and what this may mean for equal rights, gender positioning and safety under DUP coalitions, new border conditions and a loosening of the liberal hand of Europe. In:Visible Women then, became a way of championing Irish women –historically and today- to ensure these voices do not remain invisible in a festival of multidisciplinary arts, where many forms retain a dominant male edge; think trad bands and music vs dancing and applied arts and the gender make-up therein.

We use In:Visible Women to unpack, reshow and understand women of Irish origin to understand the plights and interests of women today. As interest in feminism/equality/equity rises and faith, ethnicity, nationality and gender are all debated more openly… As people begin to employ intersectionality and we start creating systems that support equitable living and parity within relational agendas (same-sex marriage, body, class, autonomy, adoption, senior leadership) it is ever more important that women feature and that Irish women, particularly, are platformed and heard.

Because how many can you name? Where are the great female Irish writers, artists, politicians and activists? Where are the statues and monuments erected for the glowing  achievements of Irish women, such as reducing the spread of cholera (Kitty Wilkinson), campaigning for female workers’ rights (Delia Larkin, Eva Gore-Booth), playwriting (Mary Manning), etc? And where will these be in the future if we do not illuminate them now? Enter In:Visible Women.

In:Visible Women is a starting point for the Liverpool Irish Festival; a highlight of good work already undertaken and underway. It celebrates achievements and offes a space in which to advance knowledge of female ideas, activism and positions.

It platforms work by women as well as centring work for women. It is not ‘anti-man’, but the work is aimed to empower women and teach us all about parity, equity and empathy.

In 2021, we have featured a lot of work from and about women, particularly our In:Visible Women Day in partnership with NUI, Galway (more here). In 2021, we saw shows such as Mrs Shaw Herself, Varo, Stowaway), but Covid-19 (and the complexities of sharing multiple online programmes) meant we didn’t brand In:Visible Women as its own strand. However, below are three year’s worth of programmes exemplifying the work we have shown in a format we hope to return to in future. Click the cover to open the PDF. 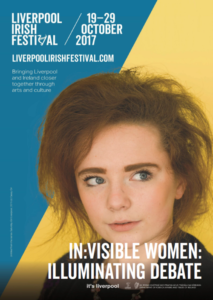 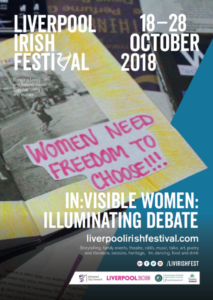 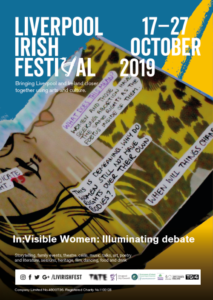