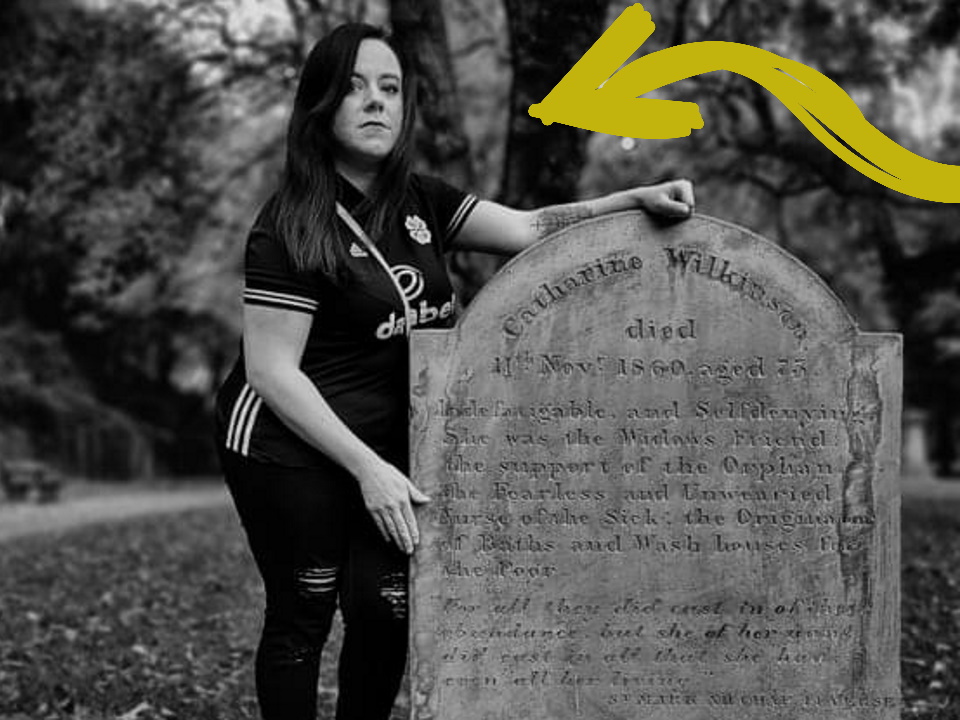 For St Brigid’s Day 2021, the Liverpool Irish Festival have commissioned a number of artists to create works that consider female empowerment and endeavour.

We contacted Cathy Carter, who has been a brilliant Festival supporter and performer for a number of years, to see if she fancied taking on a commission and within moments, she suggested writing a song about Kitty Wilkinson (1786-1860), ‘Saint of the Slums’.

Kitty has featured in the Festival before, being the eponymous hero of Carol Maginn’s play of the same name, performed by Falling Doors Theatre (2018). Now she is honoured in song, marking her life as the quasher of cholera, which saw her take on the medical fraternity with her wash-house; the first public wash-house in Liverpool.

Kitty’s life in Liverpool began on a ship from Ireland. So bad was the crossing, she lost her father and sister to the sea, affecting her family life from then on. Kitty’s story chimes with today in all manner of ways. Her tragic journey to get here by sea is relfected in the news stories of migrants crossing treachourous waters to try to find safety. Some don’t make it. That she helped to combat cholera, which swept through the nation and killed 23,000 people, reminds us of what is being done -and must still be done- to combat Covid-19 and the toll it is taking. Kitty’s ability to look at her neighbours and provide help, shows us that, we too, must think of our neighbours and remain safe.

In the spirit of St Brigid’s work -and Imbolc, celebrating renewal and refreshment- Kitty’s story seems resonant and befitting.

Chorus:
A blanket for your baby girl
A shirt and socks for Da
The sheets that lay upon your bed
Cleanest you’ve ever had
The simple things that all know the rich don’t understand
A gift to my sweet Liverpool from my home Ireland

Chorus :
A blanket for your baby girl
A shirt and socks for da (for our fathers)
The sheets that lay upon your bed
Cleanest you’ve ever had
The simple things that all know the rich don’t understand (they don’t understand)
A gift to my sweet Liverpool from my home Ireland

Cathy Carter  was born and bred in the heart of Liverpool, with parents linked to the Beatles through their school years and brought up in a family of musicians. Cathy is in great demand in the thriving Liverpool Irish music scene and has revived her Irish roots, whilst completing her family tree, tracing her father’s grandparents from Dublin and her mother’s Grandparents from Cavan. Cathy has a strong love for her ancestry and is involved in many Scouse Irish community projects.

A respected performer for over 10 years within the city, Cathy plays for the love of sharing her passion, merging music and Irish History. Irish in Liverpool will be the theme of her first EP which she hopes to release early in 2021.

Andrew Connally is a musician/singer songwriter. “I come from an Irish family that emigrated to Liverpool and the Wirral via my grandparents. I was taught traditional Irish music and songs from a young boy by my grandfathers, father and within the old Liverpool Irish Centre where I enjoyed competing in many Comhaltas Fleadh competitions. I have performed with many artists and bands throughout music venues and festivals across the country, as well as over in Ireland. I enjoy teaching music, both in person, group classes or online. Although a big passion of mine is to play live, I love writing my own material and to produce music in my own style. I try to introduce the many influences I have experienced over years into my music writing, production and playing. As well as singing, I play traditional Irish flutes, whistles, piano, guitar and bodhran”.