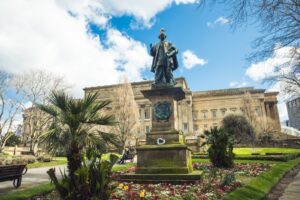 On 8 December 1906 a bronze of Father James Nugent (1822-1905), on a sandstone pedestal, was erected in St John’s Gardens, Liverpool. The inscription reads:

“Save the boy. An eye to the blind. A foot to the lame. The father to the poor. The apostle of Temperance. The protector of the orphan child. The consoler of the prisoner. The reformer of the criminal. The saviour of fallen womanhood. The friend of all in poverty and affliction. (His words) Speak a kind word, take them gently by the hand. Work is the best reforming and elevating power. Loyalty to Country and to God”

The location is relevant as he -James Nugent- was born (3 March 1822) in Hunter Street, Liverpool which was situated below William Brown Street, then known as Shaw`s Brow. It ran between Byrom Street and Christian Street. He was baptised on St Patrick`s Day in St Nicholas’s Church on Copperas Hill, which has since disappeared. Father Nugent attended a private school in nearby Queens Square, as education for Catholics was restricted.

Father Nugent, a very influential Liverpudlian known for his good works, became a curate at St Nicholas’s Church, where he himself had first been baptized. Perturbed by the poverty of the large Irish immigrant population, he opened a Ragged School and later a night shelter; a boy’s refuge; a refuge for discharged women prisoners; a home for mothers and babies and more. He also popularised penny savings banks to help the Irish poor put money aside for hard times. He strongly promoted temperance and assisted emigration.

His League of the Cross for Total Abstinence, launched in 1872, spreading to countries as far away as India and Australia. He is described on the right side of the pedestal as “the friend of all in poverty and affliction”. Something of his impact can be gauged from the fact that an estimated 10,000 people came to pay their last respects to him. The Nugent Care Society carries on his good work in Merseyside to this day.

After studying at Urshaw and in Rome and being ordained in St Nicholas’s Church, he began his long association with the Irish communities and casualties of The Irish Famine. In his first sermon, at his first parish of St Albans in Blackburn, he preached in aid of the Liverpool Famine Fund. He came back to Liverpool to replace Father Gillow at St Nicholas, who had died of typhus. When he returned, Father Nugent was one of the 35 Catholic priests who risked their lives tending to the sick and Irish poor.

There was a huge housing shortage. In 1841 the population leapt from 300,000 to 376,000. 22 per cent were Irish born. The many impoverished homeless -and often parentless children- haunted the city. 64 of every 100 would die before the age of 9 from preventable causes.

Father Nugent saw education as a way out of the poverty trap. This inspired him to set up the first Catholic school, a Catholic middle school in Rodney Street followed by the Catholic Institute in Hope Street. Over time he was instrumental in setting up orphanages, training schools, mother and baby homes and hostels for single men and women across Liverpool.