Maz O’Connor came to the Festival’s attention in 2018 when she discovered and shared the history she had unearthed about her family’s Irish connections.

Those findings inspired her next album, Chosen Daughter and a feature we ran (article on page 24). Maz played as part of our Visible Women in 2019 and last year, told us how she had uncovered the story of Bridget Cleary and was writing a piece of work that would bear witness to her story (link, page 26). We pick up with Maz, as she and her team work through Covid-19; testing songs, text and stage directions to help master storytelling, production values and character complexities, to find Bridget and pay tribute to her life. >>> 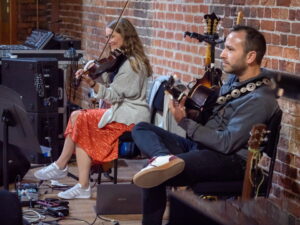 Since 2017, I’ve been working on a piece of music theatre based on the remarkable true story of Bridget Cleary, a woman from Co. Tipperary who, in 1895, was burned to death by her husband and family because they believed her to be a fairy changeling. The fairy ritual they performed was intended to bring ‘the real Bridget’ home, but, instead, she was killed.

As I wrote in my piece of October 2020, the Liverpool Irish Festival has been supporting me through the development of this project. Festival Director Emma Smith offered me mentorship when we first went into lockdown, and helped me move the piece to the next stage: collaborating on the script with London-based Irish writer Alan Flanagan, and giving the project a week’s research and development (R&D) at Britain Pears Arts (Snape Maltings, Suffolk).

Britten Pears Arts have been supporting me as a composer for a few years, and when I wrote to them about the project and explained that what I needed most was space and a week to explore with other creatives, they invited me to R&D the piece at their concert hall. The residency was would feature as part of their annual Festival of New (27 Feb 2021, programme here), for which they invite artists across different disciplines to develop something that takes them out of their comfort zone. The emphasis is on taking creative risks. In 2020, though, we were faced with risk of a different kind.

The offer was made in the Summer, and the residency was booked for September. I was so excited, but for those few weeks in between—with the constant changes to the rules around COVID-19—I wouldn’t let myself believe it was actually going to happen until we were in the concert hall at Snape Maltings. I invited director Tinuke Craig, movement director Martin Bassindale, the aforementioned dramaturg Alan Flanagan, seven actor/singers, and two musicians, hoping all the time that we’d actually be able to meet and explore the piece together. Thankfully, we were; albeit with two metres between us at all times. 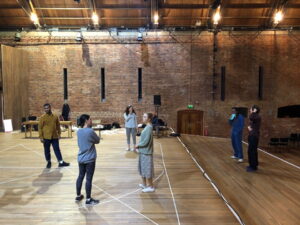 Image: Our home for the week.

Once we’d all settled into Snape, the two-metre rule didn’t get in the way of how thrilled we all were to be making something. After such a stressful year, it felt very special to be collaborating with such talented creative people, and to have such a rich story to explore. The moment I heard the musicians start up, I was giddy with excitement. Besides the fact that it had been months since I’d heard live music of any kind, hearing what I’d written manifested by these fantastic players made me realise what magical potential the piece might have. 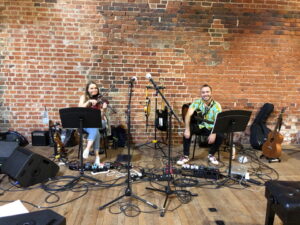 The aims of the week were a little uncertain even as it began. Although we were aware that a film maker was coming in on the Friday to record us for the Festival of New, we decided early that we were not going to try and produce some version of part of the show. We only had a week, after all; but more than that, we wanted to use the time to play and explore, not fix things down.

The time at Snape was very special in that they didn’t expect anything from us at the end: no production, not even a particular outcome. And that’s very unusual in the arts, which is a shame, because sometimes I find that the pressure of an outcome actually makes the work worse.

You rush into decisions that don’t serve the piece because the deadline causes panic and it’s a relief to find any solutions at all. It’s important in creative work to allow time to let things grow and change. Because once things are fixed down, you become attached to them, and it’s very difficult to jettison them later, even if you can see that they’re all wrong. It would be like learning to cook a meal before exploring the basics of flavours: you can cook one meal, sure, but whether you like it or not, you’ve no idea how to change it. And besides, I still only had a first draft of the songs, and a very rough idea of scenes and dialogue. I needed to stay open to major changes in the plot, characterisation, and style (a challenge to my ego, but the best thing for the piece!) so that I could come out of the R&D able to write a decent second draft.

I also had lots of things I wanted to try out musically with the actor-singers, having never heard the songs I’d written except in my own demos, where I’d layered up my own voice on my recording software to represent a group of characters.

Tinuke was keen to explore the theatrical language of the piece; how it might look and—with Martin’s input—how it might move. She was particularly interested in how to dramatically express the fairies, especially to an audience who might not be familiar with the specificities of Irish folklore. How naturalistic was the piece going to be? Did we need named characters and an ensemble, or could we work with a core group of actor-singers who moved between roles?

Alan wanted to me to make sure that the themes of the piece were as realised as possible; namely the fairies, Irish nationalism, and the role of the Catholic Church in this community. He gave us a series of fascinating presentations on these themes, and led discussions afterwards that really helped me to anticipate what an audience’s reaction to them might be.

A series of exercises led by Tinuke helped very much with my questions on character. She created Bridget’s village, Ballyvadlea, in the concert hall, and had the actor-singers move through 24 hours of their typical day. So much content was generated for me out of that single exercise. Bridget’s aunt Mary, for example, had a bad hip, and her cousin, Johanna, was stuck inside all day looking after her children and older brothers. I saw how each meal had to be made from scratch, how every drop of water had to be fetched from the well. This was a hard life. These details told me a lot about these people and their world, and were woven into my second draft.

The first song we got onto its feet was the opening number: Trouble Always Comes to a Woman Like That. This introduces Bridget to the audience. It is three days since she went missing, and the villagers gossip about her marriage, her fondness for the fairies, and her ‘wild ways’.

Martin laid a grid out on the stage and there were certain rules about how the actor-singers could move within it. The effect was reminiscent of ritualistic movement, and very effective. A theatrical language was glimpsed. 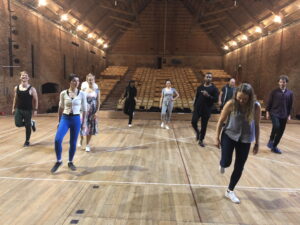 Image: Nicola teaching the basics of Irish step dancing to the group.

At the end of the week, our draft of the first twenty minutes of the show was filmed and recorded live. It’s immensely helpful for the development of the piece to have this record. The footage, edited to include an interview with me, will be featured as part of Britten Pears’ Arts’ digital Festival of New on 27 Feb. Although COVID-19 continues to disrupt the piece’s development, I hope it won’t be too long before we’ll have a full production on the way. Perhaps by next St Brigid’s Day. 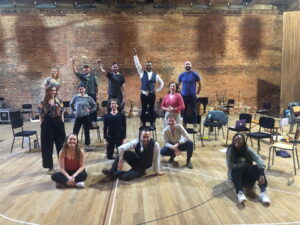 Image: The end of a fruitful week.

<<< The Liverpool Irish Festival supports artists at various stages in their career, sharing their journey with you to help inspire others and to demonstrate what a substantial commitment it is to be an artist. Maz’s tenacity, work ethic and clarity of vision -to tell a hard-to-hear story- has brought her to this point and helped forge creative connections that may last a lifetime. To have achieved this, under the imposed restrictions of 2020, is to be applauded!

Finding Bridget, via character interpretation, song and improvisation is time consuming. It also requires an ability to process sources, interpret stimuli and a team commitment to bring the world to life. Despite being over 125 years old, Bridget’s story is, sadly, one that continues to chime today. Misuses of education and folklore continue to influence murderous and abusive practices, specifically to harm women. Thus, it is an important story, told by a brave voice, that needs to be heard and understood by those with a power to make change. We continue to work with Maz in the hope of bringing this musical theatre piece to Liverpool, when it is possible, and to paying homage to Bridget’s experience. We hope you’ll join us.