For the last few years, the Liverpool Irish Festival has coordinated Merseyside’s contribution to #GlobalGreening for St Patrick’s Day (#StPatricksDay2022 #FeilePadraig). This year we have linked #GlobalGreening with the Irish Arts Foundation‘s #IrishHistoryMonth.

#GlobalGreening was originally set up by Tourism Ireland in 2010. It gained international partners, with sites in Sydney, Venice, Milan, Hong Kong and Washington DC and many more. Each celebrates Irish communities across the world. Turning emerald honours the influence, assimilation and impact Ireland has had. It reminds us of the time, effort and labour Irish perople have invested in their ‘found homes’ and the friendships made within their host communities.

Due to Putin’s acts of war on Ukraine, Tourism Ireland put #GlobalGreening on hold in 2022, instead running the Green Button Festival, in honour of St Patrick’s Day. You can find out more, here. However, in Liverpool there were still many partners that wanted to honour #FeilePadraig and light, in kinship, with those that turned yellow and blue (Ukraine’s national colours). Thus, Liverpool Irish Festival continued to support #GlobalGreening, sharing messages of solidarity with displaced peoples and sharing the night sky with them. Read on for more.

As with organisations and communities up and down these islands, Liverpool Irish Centre, Irish Community Care and others all have their own activities. In addition to these, the Irish Government and Embassy provide various offerings, including huge events in London, Glasgow and other centres of activity.

Use these hashtags to learn more on social media: #GlobalGreening #StPatricksDay2022 and #FeilePadraig.

Each year, we wait until dusk to set off on our own adventure to capture images of our participating partners, going emerald in honour of St Patrick’s Day. Ths year, our green partners share the skyline with those who are showing solidairty with Ukraine, in their blue and yellow regalia. A recognition of displacement and solidairty is shared between the two colour sets, honouring both the Ukrainian people during this time of conflict and the Irish diaspora.

INvolved this year were:

Sadly, Liverpool Town Hall has had to withdraw from #GlobalGreening in 2022 due to a technical difficulty. We’ll look forward to them rejoining us in future.

What was the plan?

We welcomed you to visit as many of these places as you can and add your images to social media, using our handle @LivIrishFest and hashtag #GlobalGreening. We took photos of all of the buildings and structures and present them for you in a short film below, made and issued on 18 March 2022 (or you can view the archive of images here). We’ve posted it on Facebook and Twitter, recording a 65-mile round-trip in the process!

We hope you will enjoy seeing these buildings and structures light up in honour of Ireland and its people. At the time of writing, the Ukraine is defending itself against a vicious and unwarranted attack from President Putin of Russia. His actions are displacing millions of people from their homes and sanctuary. #GlobalGreening is recognition from the world that displaced people will find homes and sanctuary abroad. Freedom from oppression is a right and it will shine. Irish in Britain have made a statement the Festival are in full support of, on Ukraine. You can read it here. 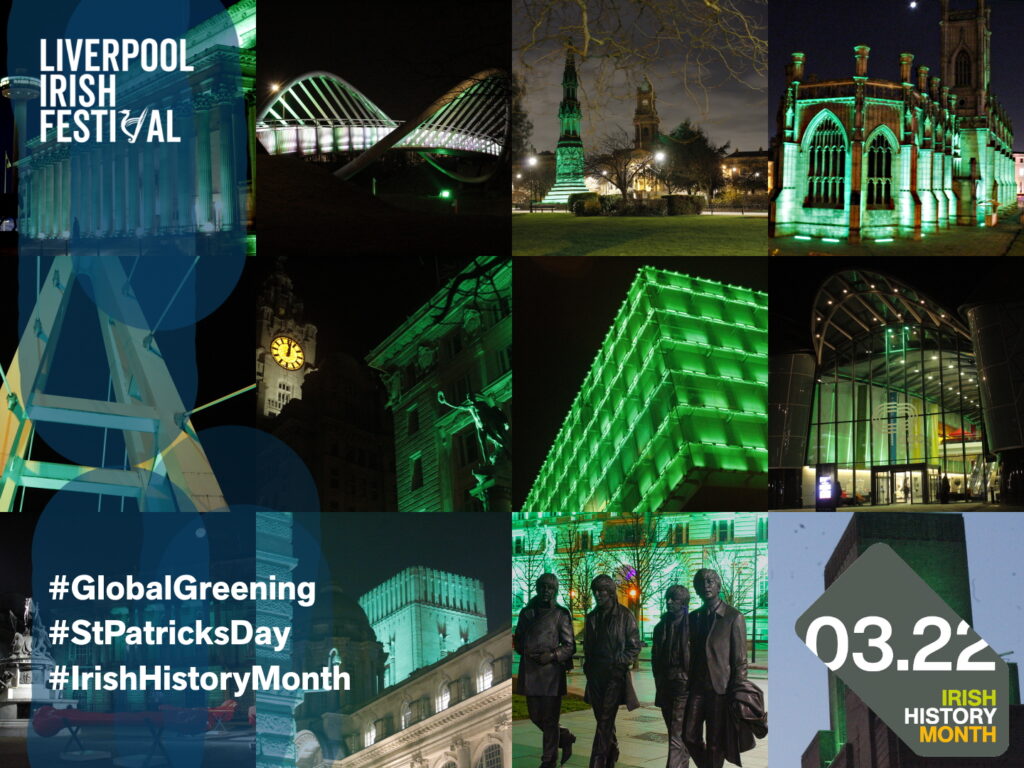