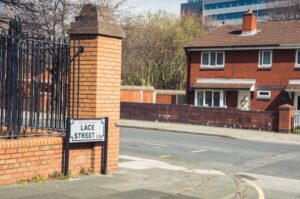 Lace Street was chosen by the Liverpool Great Hunger Commemoration Committee as the ‘site of heaviest mortality of destitute Irish emigrants in 1847’. When originally erected, the plaque was located on Lace Street, the exact current where abouts of the plaque are unknown, but believed to be in the custody of a local school, Holy Cross Catholic School (Fontenoy Street, L3 2DU). At the time of writing, the location couldn’t be exactly mapped, but the Liverpool Irish Festival will continue work on this within the following project run.

The case of Lace Street is a sad one. It is a key site in demonstrating the impact of The Irish Famine, based in Vauxhall. By the late 1840s its population was almost entirely Irish. It contained many cheap lodging houses; prime breeding grounds of disease. Between 1 January-31 March 1847, 90 days inclusive, 181 people died in the street, excluding residents who died in hospital. Lace Street is no more than 170m long and two people from that street died every day for 90 days. This was from of a population of 1,400 (living in 109 houses), meaning 12% died. The number of deaths experienced on Lace Street exceeded the combined totals for the Abercromby and Rodney wards, which combined had a population of 20,000.

The mortality in Lace Street is perhaps less surprising when we consider that the water company only turned the water supply on only three times a week, in an environment where many people had no utensils for storing water.

In 1850, most of the population in the street spoke Gaeilge (Irish). During the nineteenth century, the Irish born population in Liverpool was greater than most Irish towns. At the time of The Irish Famine, diseases such as cholera and typhus fever killed large numbers of poorly nourished people, taking the lives the malnutrition hadn’t yet manged to take.

Policemen found Martin Finnegan collapsed in the street and unable to speak. He was taken back to a cellar in Lace Street where he ‘lived’. His bed was straw on a mud floor, with no covering of any description; he died during the night. The post-mortem verdict was ‘death from diseases of the lungs combined with want of sufficient food’. Finnegan, his wife and three children had been surviving in Liverpool by begging.

In March 1851, Maggy Tighe worked as a dress maker and lived in court housing in Lace Street with two families: the Manions and the Lambs. There was no sign of any of her Tighe family nearby, but at least another 300,000 Irish refugees were crammed into the city’s cellars and alley-way housing. Liverpool had become the ‘capital of Ireland in England’ and was known for having the worst of all European slums; notorious for poverty, violence, and unsanitary living conditions.

Everyone in Maggy’s shared house was from Ireland. The head of the household, Andrew Manion, was a “dealer in fruit”; as was one of the other lodgers, Thomas Lamb. Thomas was a 25-year-old living with his mother Mary and sister Bridget, each “hawkers of fruit.” Though
it is unknown as to why, Thomas used two surnames, Lamb and Delaney (or Dunlaney) throughout his life. It doesn’t appear he was trying to hide from anyone by changing his name, but he used both names interchangeably over 20- years, while living at the same address on Lace Street. When he was admitted into the dreaded workhouse, in 1908, his name was listed as “Thomas Lamb or Dunlaney.”

On 19 May 1851, Maggy and Thomas Delaney married at St Nicholas’s Catholic Chapel.

Living on Lace Street, with Thomas pushing heavy loads of fruit between the docks and dealers around Liverpool, suggests a hard life. This suspicion is amplified when we learn that Tom ended up in the workhouse.