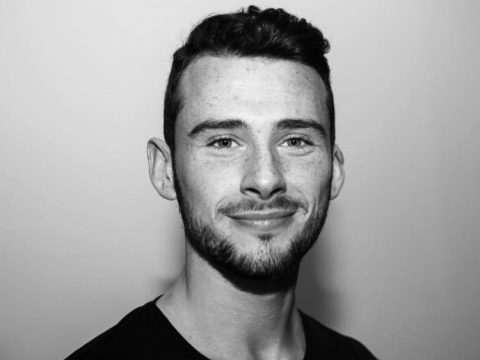 The Liverpool Irish Festival strives to support emerging artists and talent. Last year, we were pleased to feature Scadán within our programme; a play that considered the role of female volunteers in the Easter Rising and Liverpool’s connection to the action.

Taking place in a former warehouse space, right on the waterfront, audiences were impressed by the multi-layered textures of Scadán, which incorporated historic documents, a live score, projections, songs and a strong female ensemble. Directed by Roisin Fletcher, a Liverpudlian with close Irish heritage, and performed by a cast of multidisciplinary Scouse and Irish performers, it seemed the epitome of what the festival aims to do; tell and celebrate Liverpool, Liverpool Irish and Irish stories.

This year, Roisin is back and – getting by with a little help from her friends – is ready to deliver Misterman. Written by contemporary Irish playwright, Enda Walsh, this one-man play outlines Thomas McGill’s descent in to evangelistic despotism, in which he determines to save his small town from its ungodliness.

Taking the lead in this play is Cameron McKendrick, who has considered how he has become today’s ‘Misterman’…

A lot of people move away from home for university, only to remain for the length of their studies; but I knew – from the moment I stepped off that easyjet flight from Belfast to Liverpool – that I was here to stay.
There are a lot of comparisons made between the two cities, so maybe it is this familiarity that has made me feel at home all these years. The fact that all it takes is for me to speak about 5 words in my native accent and I receive the kind of attention enjoyed by a local celeb. That doesn’t hurt either! “Are you Irish!? Boss!”

Take a wee look around this city and you’ll soon find that the Irish aren’t the only ones to be flocking to these parts. On my course alone there were people from all over the country enjoying the hospitality of Scousers. As an actor this was a great resource; being able to immerse myself and pick up new, authentic dialects to add to my repertoire. My Scouse, for one, isn’t entirely offensive anymore!

Culturally this city is amazing, as well. There is always something going on for performers and makers; so as long as you’re getting involved in stuff, you’re more than likely going to meet the right people along the way to collaborate on your own ideas [with]. That’s how Misterman came about for us really. I met the director Roisin (Fletcher) at LJMU studying Drama. After graduating we went on to do the Hope Street* Emerging Artists Programme. Many of the people I work with now have been associated with Hope Street in some way and I believe this is where we really found the confidence to put on our own shows. Here we were introduced to Luke Thomas (Misterman’s musical director) and Laura Lomax, who is designing our set, along with Samantha Airey. Roisin [saw] the original production [of Misterman], starring Cillian Murphy, years previous. It had a massive impact on her and so she was eager to bring this new writing to more people.

When it comes to theatre companies putting on Irish plays, there always seems to be the same ones being churned out, again and again. While this is an obvious testament to the skills of the writers, we feel it’s time to produce fresh material and give audiences ‘new Irish classics’.

After reading Misterman myself I thought it’d be stupid to turn down the opportunity of playing this unpredictable and misunderstood character. You feel for him. Then you’re disturbed by him. This play is packed with wit, weirdness and wonder. I’ve never read anything like it and I believe audiences will walk away having been surprised and shocked with how Thomas’s complex mind works.

* Hope Street Emerging Artists Programme. Hope Street are a performance company based in Liverpool. Like Liverpool Irish Festival, they are members of Creative Organisations of Liverpool (COoL) and good friends of the Festival.

Collage Creations
Board Trustee vacancies – can you help?