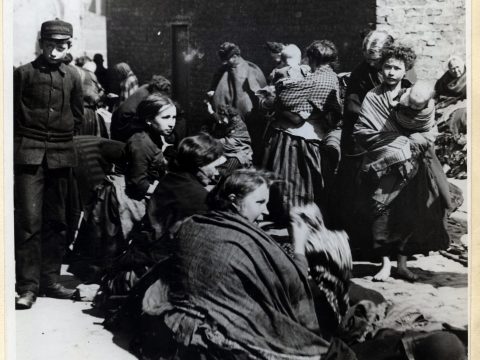 A new book on the history of Liverpool Irish will launch at LIF2017.

‘In Hardship and Hope’ by Greg Quiery tells a narrative history of one of the largest European migrations in modern history and how Irish culture has shaped Liverpool.

Liverpool’s Irish heritage is well known. A large proportion of the city’s inhabitants boast Irish ancestry. A new book, written by social historian, musician and guide Greg Quiery presents a narrative history of the community. Launching at the Institute of Irish Studies during the Liverpool Irish Festival, the book describes the struggle for social and political acceptance in Liverpool by the Irish immigrants and the impact of the city’s Irish heritage on Liverpool’s modern culture.

From Newtownards in County Down, Greg Quiery moved to Liverpool from Belfast in 1974. He is a former fellow at the Institute of Irish Studies, a board member of the Liverpool Irish Festival and Chair of the Liverpool Great Hunger Commemoration Committee. ‘In Hardship and Hope’ charts the rise of Liverpool’s Irish population, from the first merchants in the 16th century to ‘Lyerpole’ to the steady migration after the Act of Union in 1801. As the Irish economy declined, but its population rapidly expanded, Liverpool welcomed an increasing number of Irish migrants. As the Irish famine reached its height in the 1840s, it is estimated 2.3 million Irish emigrants arrived in Liverpool.

Delving into the socio-economic, political and cultural impact of this population shift, the story is occasionally bleak, exploring slum housing and poverty, ongoing sectarian conflict, anti-Catholic sentiment, social reform, the impact of faith, riots and disturbances. Anti-Irish sentiment continued into the 20th century, particularly in 1909 and into the 1930s. As xenophobia swept Europe, Liverpool was not immune. The Liverpool Review described the Irish as “a real alien menace” in 1934.

The book examines how the Irish influence contributed to the modern Scouse identity. Irish nationalism and its strong ties to the Labour movement and the Labour Party in Liverpool, the role of the Liverpool Irish in the War of Independence laid the foundation for shaping modern Liverpool’s revolutionary state of mind. “An anti-establishment attitude …has survived in Liverpool … ever since”.

With the arrival of Merseybeat and the flourishing of Liverpool’s Scouse identity, a strong affection for Ireland remained in its second and third generations. As sectarianism declined, Liverpool and Everton football clubs each commanded a greater allegiance from both Catholics and Protestants than former sectarian institutions. As is noted, both Queen Elizabeth II and Pope John Paul II visited the city’s cathedrals in 1978 and 1982 respectively.

In the words of Dr Kevin McNamara, former Labour MP and Shadow Northern Ireland Secretary, shortly before his death in August 2017: “(This book) is that unique combination of carefuI and popular scholarship. (Greg) pulls all the strands of the complicated history of the Irish in Liverpool and district together in a few hundred pages of easy reading”.

Mary Hickman, Emeritus Professor of Irish Studies and Sociology at London Metropolitan University writes: “From poverty to politics (the book) covers most aspects of Irish Catholic experiences in Liverpool and many of the most significant characters”.

Commenting on Greg’s book, Professor Frank Shovlin, Head of Department, The Institute of Irish Studies: “Covering 500 years of Irish interaction with Liverpool, nobody is better placed than Greg Quiery to unpick and elucidate the intricacies of that long relationship. Unparalleled in his expertise on the Liverpool Irish, a great friend of the Institute’s, and an historian with deep reverence for our forebears, Greg provides a wonderful addition to our knowledge of this city with this marvelous new volume”.

Greg Quiery: “Having arrived in Liverpool in the 1970s I was surrounded by people sharing their living history and stories of Irish heritage. There’s an importance in remembering our history, the way migrants were treated, often marginalised in poor housing and poverty. By the 1990s, Ireland’s popular culture meant that past discrimination was forgotten, but migration continues to be a significant force in our world today, which is why the documentation and understanding of the Liverpool Irish remains so important.”

The launch of ‘In Hardship and Hope’ takes place at 6pm on 23 Oct 2017 in the Eleanor Rathbone Building, in partnership between the Institute of Irish Studies at the University of Liverpool and the Liverpool Irish Festival.