What is a wife without a child? Incomplete? Worthless? Childless – or childfree?

In rural Ireland in the 1950s such a woman would almost certainly have been scorned as “barren” and her husband would have been within his rights to pack her bags and send her back to her family in disgrace.

This is the cultural background to a new play Body and Blood, which premieres at the Liverpool Irish Festival in October 2017. Here, the writer, Lorraine Mullaney explains how she came to write the play.

“She’s no good to me now,” said Bridie Keenan’s husband, as he returned his “barren bride” to her parents. “No farmer wants a barren wife. I have two sisters in the house to feed already.”

Poor Bridie. Sent home in disgrace to face the humiliating status of “barren bride”. But, instead of rebuking Bridie’s husband for his cruelty – or blaming him for his own lack of fertility – the local gossips in the Post Office blame the bride’s parents.

“They waited till she was 30 before making a match for her. Matches should be made when the girls are young,” they say. “Then there’s plenty of time to make a good family. If Bridie’s parents didn’t have the dowry, they should have sent her away to find work.”

This harsh reality forms the lives of the characters in Body and Blood. The play is set in 1956, a time when many marriages in rural Ireland were still arranged by matchmakers and the girls matched to local farmers from the age of 15 onwards. Irish farmers often deferred marriage until they were well on in years so they needed much younger wives to bear them sons to work on the farm and inherit the land to keep the family name alive.

The family of the bride entered a discussion process, organised by the matchmaker, in which dowries were balanced against the land and livestock of the potential groom. A ritual called “the walking of the land” was part of the process. In this ceremony, the groom walked the father of his desired bride around his land to show him what he had to offer his daughter through marriage. Once the dowry and cattle had been negotiated and the match agreed, they would mark the occasion with a celebratory meal, for which geese would be slain and whiskey and porter bought.

Once married, the girls often found themselves living on remote farms with animals to be fed, bread to be baked, bacon to be boiled, cattle to be milked, and turf to be cut. All amidst the driving rain and – if you’re living on the side of the mountain as the characters are in Body and Blood – the relentless rolling mist.

It’s not surprising that travelling to England became an attractive prospect for some girls. Body and Blood tells the story of a young Irish girl, Aileen, who comes to London in 1956 searching for her runaway sister, who fled rural Ireland to escape an arranged marriage to a man with “a face like the Turin Shroud”. But, instead of finding her runaway sister, Aileen finds new freedom in London and a romance with Jimmy. Which way will she turn? Will duty win over desire? 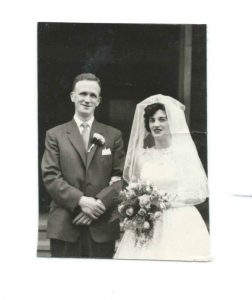 Image: The author’s parents on their wedding day, London 1960.

My mother also came to London in the late 1950s from County Cavan, and one of her stories was the inspiration for this play. She loved the West End, where she worked as a chambermaid in the hotels, until she met my father, from County Sligo, and they got engaged. My parents married in London in 1960. No dowries or cows exchanged hands.

When my father’s mother came over from Ireland to meet her new daughter-in-law, she didn’t approve of the engagement. She told my mother: “I came to my marriage with a dowry and cows but you’ve come to yours empty-handed.”

My mother told me this story when I was a child and I found it shocking. Growing up in 1970s London – in a Reggie Perrin-style suburb of 1930s semis and men in navy blue suits catching the 7.57 to Waterloo – it felt like a story from centuries past, or a distant culture on the other side of the world. How could a country that was so close in distance be so far away in culture? 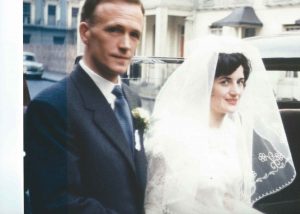 The author’s parents on their wedding day, London 1960.

Irish matches were designed to keep the land in the family name and they were very much a product of their time: an era when duty to land, family and country came before personal freedom. They weren’t necessarily forced marriages and returning so-called “barren brides” to their families was at the most brutal end of the spectrum. At the other end must surely have been many happy marriages, perhaps with more realistic expectations than those with more romantic beginnings. And some of today’s methods of meeting a likely partner have their own brand of brutality with their snap judgements and swipe-and-reject culture.

When I was promoting a shorter, earlier version of this play in North London over the summer, I handed a flyer to an Irish girl who was sitting outside a pub on Upper Street, Islington. We got chatting about how far Ireland has come since the days of arranged marriages – or matches. Finally, she laughed: “I wish they still had arranged marriages at home. Trying to find a man in London is a nightmare. I need all the help I can get.”

If you have a story about arranged marriages you’d like to share, contact Lorraine on [email protected]. Lorraine will collate the stories gathered as research for a book. Your story will not be published without your express permission.

Lead image: Sorcha Brooks and Pamela Flanagan play the mother and daughter in Body and Blood.

About arranged marriages in Ireland

Arranged marriages in Ireland continued well into the 1970s.  The brides’ dowries were balanced against the land and livestock of the men they were matched with. Marriages were arranged by matchmakers and the girls could be as young as 15. Irish farmers often deferred marriage until they were well on in years so they needed much younger wives to bear them sons to inherit the land and keep the family name alive. A matchmaking festival held during the month of September in Lisdoonvarna, County Clare on the west coast of Ireland has been running for over 150 years (more info here).

Unclouded Moon Productions develops and produces new plays that tell stories about ordinary people in extraordinary situations. The plays explore universal themes in a way that is entertaining, engaging, and thought provoking, with a particular focus on Irish culture and its impact on the lives and pathways of generations of Irish men and women.