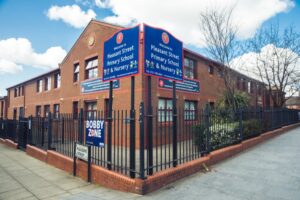 In 1807 The Benevolent Society of St Patrick was instituted by influential bankers and merchants in Liverpool. The purpose of the foundation was to instruct children in reading, writing and arithmetic and for the clothing and apprenticing of poor children descended from Irish parents. The first school was in Bolton Street.

The new building, in Pleasant Street, was built in 1818 at a cost of £2,681. The average attendance (per year) at the school was 410 children. In 1831, the school was described in the House of Commons as a model school where Catholic and Protestant children were educated together.

By early 1840, the attendance had fallen to 150 and the school was threatened with closure. The Corporation offered to take over the school in 1839, but was refused. An emergency meeting of supporters (including William Roscoe, 1753-1831) was held in 1842. In 1843 William Rathbone (1787-1868) was appointed Chairman of the School Committee. The school was enlarged in 1851 with a new section for infants added. The children at the Pleasant Street Board School were separated by biological sexes -and taught on different floors- until 1852, when the school was re-organised into a mixed system.

It was noted in 1858 that corporal punishment had almost entirely been dispensed with at the school, without impacting on order or discipline among the pupils. The school’s records show the following subjects were taught at the school: social economy, the science of health, elements of chemistry, carpentry, tailoring, simple elements of booking, singing and drawing. Among the school laws it was stated that it was “very wrong to write on the walls, to climb upon the doors and to cut the wood”. The requirement for boys and girls to treat each other with proper respect and kindness is also noted. In 1866, the name of the school was changed to The Hibernian British School. In 1867 a representative from the school approached the vestry clerk to enquire whether the vestry would pay the fees of children whose parents receive parish relief. The vestry replied that it was bound to see that people did not starve and that it had its hands full without entering into a crusade against ignorance. The managers applied for the transfer of the school to the School Board in 1872, an undertaking completed in 1874.

The school continued to operate as a multi- denominational school throughout the following decades, including two classes from The Hebrew School (Hope Place) in the 1950s, using spare rooms in the building while waiting for their new building in Childwall to be completed. It was documented in 1960, that since the school moved to Pleasant Street in 1818, about 18 million attendance ticks had been entered in the school’s register.

The Pleasant Street Board School building was closed as a school in the 1980s and the primary school moved to a site across the road (L3 5TS), opening in 1999. It was redeveloped into apartments, circa 2008.

The Benevolent Society of St Patrick was an influential group of people. From the society’s first school in Bolton Street to its new building in Pleasant Street 1818, it is likely that children of Irish migrants -and later those that fled The Irish Famine- would have been educated at the school. In his book Catholic in Liverpool, Thomas Burke notes that in 1821

“St. Patrick’s feast occurred on a Saturday that year […] the heart of Catholic and Irish Liverpool was touched in its tenderest part, and a great procession was the result. Those were the days of great faith. Consequently[,] the day was opened by the Irish Society attending Mass at St. Mary’s, a compliment to the parent church as well as a thanksgiving to God, and then reforming, the procession wended its way to St. Anthony’s, where the second half of the procession had also heard Mass at an early hour.

“Led by several carriages in which were seated the rector of St. Nicholas, Father Penswick, Father Dennet, of Aughton, and the preacher at the ceremony, Father Kirwan, St. Michan’s, Dublin, the monstre procession moved off on its long march to Park Place. Then followed the Irish Societies, wearing their regalia, bearing banners and flags, and accompanied by numerous brass and fife bands, including the Hibernian Society, Benevolent Hibernian Society, Hibernian Mechanical Society, Benevolent Society of St. Patrick, Amicable Society of St. Patrick, Free and Independent Brothers, Industrious Universal Society and the Society of St. Patrick. […] Behind these organisations which comprised fifteen thousand men, marched the school children from the schools of Copperas Hill and the Hibernian School in Pleasant Street”.

This not only name checks the society and the school, but locates their network within many of the communities and sites witnessed within the Liverpool Irish Famine Trail. That 15,000 people were able to march for St Patrick’s Day, in Liverpool in 1821, also shows that an Irish population was already evident 25-years before The Irish Famine.

Jesse Twemlow was the Headmaster at Pleasant Street for 28-years, until his retirement in 1902. In one school document it was noted that Mr Twemlow was sometimes exasperated by pupil teachers, one of whom he described as ‘not only lazy and careless, but very dull and stupid (and) should choose some other calling’. He was -particularly concerned by the apparent pupil teachers’ lack of control in the classroom.