REROOT is a short animation, produced in English and Gaeilge by Northern Irish TV and film company Dogleap Productions.

Reroot is intended for a family-friendly, multi-age audience. Commissioned by Liverpool Irish Festival, Gael Linn and An tUltach, it links to the Festival’s theme (hunger) by looking at character identities and how they’re motivated by different needs (mental health, community cohesion, culture and environment).

This is the trailer:

Below, the creative team explore the film’s meaning and development, along with how a film is made, financed and supported. 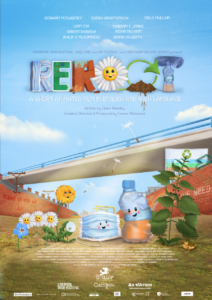 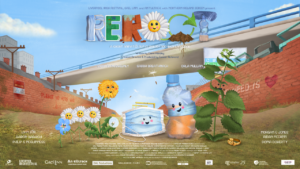 REROOT is a deceptively simple film with lots of moving parts. Delivered by an ensemble of discarded objects, quirky weeds and wildflowers, they communicate universal stories with surprising ease. The story follows Plastic Bottle after she’s been thrown into a weed-filled patch of urban wasteland, under a Belfast carriageway. She’s down-in-the-dumps and homesick. Ever the optimist, she tries to fit in with the eco-community and makes friends with the wild lives growing around her. After meeting a (not-so-prickly) Nettle, a comforting Claddagh Ring and a fearless Face Mask, they learn it’s okay not to be okay and not to know your way; we’re all wildflowers in this world.

Connor Richmond, Director: “Whilst humans battle with issues of division and diversity, our eco-community suffers. REROOT provides viewers -young and old- with an opportunity to talk about difference in a positive, celebratory way, whilst learning about our natural world, carbon foot printing, cultural heritage and the importance of minding ourselves (and the minds of others). If we have the right conversations for actionable change, then humans can live in harmony, embracing all kinds of identities”.

Connor -who won the open call pitch- is honoured to produce the short, having gained additional support from multiple investors to engage the project and crew. “It’s such a special opportunity to tap into the imagination of our viewers; to celebrate and explore folklore and the welfare of our wildlife and wild lives in a contemporary and original way. It’s a story about individuals, place and connection. What grounds us (and them), through the thunder and rain of such dark times, is the colour and zest of our collective community spirit; our sunshine and light! Friendship is instinctive meaning we can break down barriers to overcome difference. Really, we’re all wildflowers learning how to grow, so this is about all of us. No flags or divisive borders, just the colours of the rainbow and our character’s conversations”.

Set in Belfast –a place currently on the front pages due to Irish Sea border and Brexit debates- the underpass represents a mythical space, woven in to the fabric of folklore and fairy tales. It’s the perfect space to hear indigenous words from the wild. Irish-language voiceover director, Clíodhna, adds, “it’s a wonderful opportunity to set the Irish language on the world stage. Encouraging us to return to our roots reminds us of the importance of identity”. She recalls the proverb: ‘Níl aon tinteán mar do thinteán féin’ (‘there’s no place like home’), before explaining “REROOT celebrates the beauty of our native place. Through the excitement and playfulness of these wild lives, audiences can find a true sense of belonging, hope and heritage”. 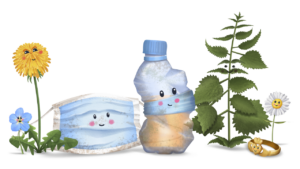 As the war in Ukraine rages; news of refugees, displacement and the creation of diasporic migrant groups is rife. For those with a sense of ‘home’ there is a commonly held belief that identity and language provide roots. Chiming with ‘hungers’ and need for nourishment, warmth and safety, the film nods to diasporic experiences of being far from home; feeling lost and lonely and being isolated within new communities. These feelings can trigger mental health issues and anxiety, flagging the importance of personal wellbeing; connecting with nature; breathing fresh air; laughing and crying; listening and learning… nourish to flourish.

After the script is written, storyboards are drawn, before an animatic (a visual moving story board) is edited to a temporary ‘scratch’ voiceover. This helps pace the energy of the story, influencing the shape of the musical score. Later follow rough cuts referred to a ‘first pass animations’, honed over time. Talent recruitment and voice recordings take place throughout, whilst character artworkand background designs are finalised. After the characters are ‘rigged’ and placed within the layout of the scene, the process of animation begins. This is followed by sound-mixing, scoring and final mastering. This lengthy process is a collaboration between
many crew-members who, in this instance, all work within the Northern Ireland screen industry.

“As we meet the wild lives -in their patch of wasteland- we realise this barren, abandoned space is their world. For them it’s a place of adventure, learning and friendship. Together, they are diverse and dynamic; they have an ecology and learn to love what ‘home’ means
to them”, comments Connor.

“It’s been an incredible pleasure to work on this film, as we put forward important messages, whilst showcasing an incredible variety of creative talent. I’m proud of what has been achieved and I am looking forward to the audience getting to join us in the wildlife”.

REROOT’s creative team would like to thank all financiers, cast and contributors for supporting the project. “We hope to remind viewers, around the world, that no matter where you find yourself, you can always find a way back home. Using your identity by speaking with people about it is a way of keeping it alive. If there is an action to take away from REROOT, it is to speak to one another, learn from one another and understand the skills and differences we can offer one another as well as going green. We encourage you to do both”.