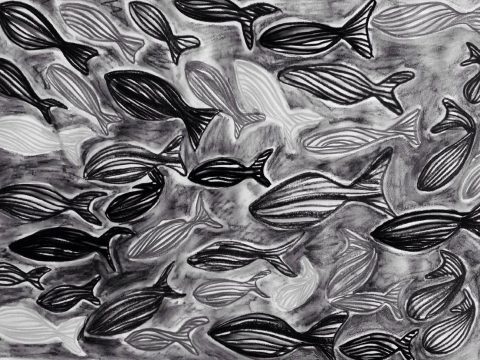 A new production written and directed by three emerging Liverpool Irish artists is to be staged at Invisible Wind Factory as part of Liverpool Irish Festival. Telling the story of a women’s commune in 1914, touching on revolution and the suffragettes, Scadàn will be accompanied by live music, imagery and old Celtic stories creating an immersive and mesmeric performance.

A Crowdfunder has been launched to support the production, which will run over two nights during the festival on Tues 18 Oct and Wed 19 October. Liverpool Irish Festival runs from 13-23 October 2016.

Written by Lauren O’Hara and Connor Kelly (both young writers from Derry-Londonderry and living in Liverpool), the production is directed by Roisin Fletcher, who lives in Liverpool with family hailing from Co. Donegal. Scadàn tells the story of Muireann, who leaves the island of Tory to make her way to America. At a women’s commune she meets four other women, one of whom is a Liverpool suffragette. Delving into the Irish politics of 1914, the suffrage movement in England and Ireland, the audience journeys with Muireann – leaving Tory, exploring the feelings, actions and emotions that continue to inform politics today, both locally and globally. Like all good theatre, it provokes us to think: should we take action, should we educate? Do we have to get involved? What does involvement even mean?

The story is fictional, but was inspired after the discovery of a book by Roisin, ‘Vivid Faces: The Revolutionary Generation in Ireland, 1890-1923’. Having travelled to Tory many times and reading about the women involved in Irish revolution, Roisin learned about women’s communes and those who were based in County Donegal. Weaving in the stories of myth, legend and tradition she knew from her family in Donegal, the production began to emerge.

Alongside the story, Scadàn will feature music composed by Liverpool composer and sound designer Luke Thomas (‘Dis Place’, ‘TENT!’) who has worked on immersive art installations for Liverpool Light Night and as musical director at Hope Street Limited.

Roisin, who completed a six month emerging artist programme with Hope Street Limited, directing The Snow Flake Trail 2015 and a new street performance for Spare Parts Festival 2016, says; “The stories of female revolutionaries rarely make it to history books. I felt a great sense of connection when I first read about these women, the communes and their politics. Telling the story of these five women using myth, music, legend and language touches on all the elements of art and storytelling I’m passionate about. It’s a fictional tale but it says a great deal about our relationship with politics now as well as our Irish heritage”.

Emma Smith, who leads Liverpool Irish Festival adds, “We are delighted to be working with emerging artists in Liverpool and to provide a stage for their voices and stories. It is also critical to me that we begin to unveil the women of our past who have long had their stories, brilliance and power shrouded from view, and impact go unrecognised. This promises to be a powerful and emotive production telling a story of a century ago that will feel very present. It’s also encouraging that its origins are in these young women and in this city”.

Connect with the festival on www.liverpoolirishfestival.com