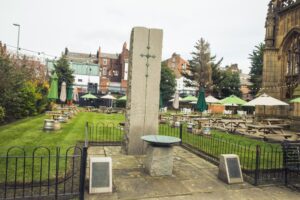 Located in the gardens at St Luke’s Church, situated on the corner Leece and Berry Streets; enter the gardens from the Leece Street entry, L1 2TR. NB: This is a key site, but does not bear a suited Irish Famine plaque (at the time of writing), therefore is not labelled with a plaque site marker.

St Luke’s Church, designed by John Foster and his son, was built between 1811 and 1832. During the May 1941 Blitz, the Church was hit by a bomb, caught fire and collapsed inwards, leaving only its stonework standing. Known locally as ‘The Bombed-Out Church’, St Luke’s remains as a memorial to those who lost their lives during World War II. It is a Grade II listed building and a registered war memorial.

Within its gardens stands the Liverpool Irish Famine memorial, a bronze and granite sculpture, commemorating the thousands of migrants who arrived in Liverpool having left Ireland during the Great Famine of the 1840s.

The sculpture, designed by Éamonn O’Doherty -a noted Irish artist- was commissioned by the Liverpool Great Famine Commemoration Committee and unveiled by Mary McAleese, President of Ireland, in November 1998. Other works by O’Doherty include the James Connolly Memorial (Dublin), the Anna Livia (Dublin), the Tree of Gold (Dublin) and The Great Hunger Memorial (Westchester, New York).

The sculpture comprises a four-metre granite standing stone with a bronze cross on its front. It is inscribed in Gaeilge (Irish) and English with the words “Coínnich cuimhne ar an Gorta Mór 1845-52/Remember the Great Irish Famine 1845-52”. A cracked bowl is positioned in front of the standing stone on a plinth to represent the fracturing of Irish culture caused by The Irish Famine. Plaques flanking the monument, one in Gaeilge and one in English, tell the story of the Famine. The English plaque is transcribed above, in The Famine Memorial and the Trail chapter (page 7).

The monument remembers the thousands of men, women and children who left Ireland between 1849 and 1852 to escape hunger and economic hardship; seeking to build new lives in Britain, the USA, Canada or Australia. Many of the migrants who docked in Liverpool remained in the city, living in overcrowded tenements and courts, with great numbers dying from disease and neglect. Despite the unimaginable hardships that Irish people faced, their story is also one of survival, resilience and determination. These families and their descendants made a significant contribution to the city, with a legacy that permeates all aspects of Liverpool’s cultural, economic and political life.

“This memorial will do more than signal our recollection of past tragedy. It will serve too as a reminder of that courage and hard work of generations of Irish people… (and) will remind us that hunger and famine persist throughout the world and we still face the moral imperative to welcome and to offer shelter to those who have lost everything…” – Mary McAleese, 24 November 1998, spoken at the unveiling of Liverpool’s Irish Famine memorial.