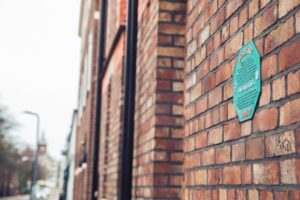 The plaque for Mulberry Street records that “Near this place, in 1847, some 2,600 destitute Irish Famine migrants were buried in unmarked pauper graves. They had died in extreme poverty in the parish of Liverpool, so ending their flight from The Great Hunger 1845-52”.

Localised famine frequently results in migration. People desperate for a better life leave their country in great waves of emigration, seeking economic and nutritional opportunity. 1847 represented the most gruelling year of The Irish Famine, when it is estimated that circa 296,000 Irish arrived in Liverpool. Of these, roughly 130,000 sailed to the USA and 50,000 returned to Ireland; leaving something in the region of120,000 ‘paupers’ in Liverpool, who had escaped The Great Hunger, but were close to destitution (Darwen 2021).

The use of the word ‘pauper’ evolved from the Poor Law Amendment Act 1834 and the 1838 Poor Relief Act in Ireland. Paupers were usually defined as destitute persons who were in need of indoor (workhouse) relief. The pauperised Irish migrants -low in energy or resilience and living in cramped quarters- were susceptible to illnesses such as typhus, a lice borne disease spread by close contact. As many gravitated towards overcrowded and poor housing, severe outbreaks of typhus erupted in Liverpool and the wider northwest of England (Darwen 2021).

In the Liverpool Journal, 22 September 1849, Dr Duncan’s report on ‘Graveyards of Liverpool’ to the Board of Health on the condition of graveyards noted that St Mary’s cemetery had recently closed. The number of burials in Liverpool was reported as being 10,000-11,000 a year with two thirds occurring in pits.

The philosophy of the Poor Law dictated that the burial and interment process of paupers be devoid of any mourning rituals. Thus the 2,600 people, who were interred near Mulberry Street were likely subjected to an undignified and inhuman burial process. Despite living, dying, and being buried in a brutal system, this group of individuals is an important reminder of what Terry Eagleton -Distinguished Professor of English Literature at Lancaster University- calls “the most important episode of modern Irish history and the greatest social disaster of nineteenth century Europe” (Eagleton 1996).

That 2,600 migrant individuals are buried collectively in nameless graves, who migrated to Liverpool in 1847 in need, is why it is important to remember them. They have become a symbol for how plights can turn savage and how help, humanity and compassion is required. We have a duty to respect and retain the memory of the lives and deaths of these individuals.

During our process, for each of the sites, we have attempted to establish a tangible connection with an individual or family connected to it. This is challenging for the St Mary’s Cemetery, as the site is no longer a functioning graveyard and has been built upon twice in seventy years. However, as noted, it is extremely important to retain the memory of events at this site to capture the importance of what happened there.

In the Summer of 2021, the Institute of Irish Studies at University of Liverpool remembered the lives of the 2,600 who were interred at St Mary’s by arranging for 26 people to gather in Mulberry Street, at a point adjacent to the site of the former cemetery. Participants each chose a small pennant. They were asked to chalk one hundred marks on the ground and tie their pennant to a wooden railing near to the burial site. Although we know a significant number of migrant Irish people who fled The Great Hunger were buried here, the mass grave is inaccessible due to site redevelopment.

This quiet acknowledgement was a way of reaching out to the 2,600 who were interred here and remain an integral part of our history. The event -named Near this Place: Famine Lives and Afterlives in 2600- was musically scored and documented. It can be accessed on YouTube.