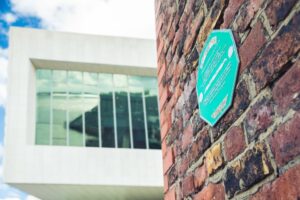 The Pilotage Building is positioned between the Waterfront Pier Head Promenade at the Canning Dock end of Pier Head; adjacent to The RMS Lusitania Propeller.

The official Liverpool Pilot Service was established in 1766 to pilot ships entering and leaving the river Mersey. The building opened in 1883 as the headquarters of the Liverpool Pilot’s Office and was operational until 1978.

The Pilotage Building plaque faces the River Mersey. The location was originally chosen to symbolically mark emigration from Liverpool to Canada, America and Australia. The plaque reads ‘During the Famine years 1845-52 over one million Irish people left from this shore to escape hunger and poverty and to seek a new life across the seas’.

Pilots in the Port of Liverpool would have met all vessels and navigated them through the river estuary to berth, as they had the expertise to dodge sand banks and operate the dock system. Outbound vessels also had a pilot.

In the 1840s nearly half of immigrants into America were thought to be Irish Catholic families. Before The Irish Famine it was predominantly men who migrated. By 1851 (the same year as The Great Exhibition), Liverpool was the leading emigration port in Europe with 159,840 passengers sailing to north America. It has also been estimated that 1,250,000 Irish people emigrated between 1845 and 1851 as a result of An Gorta Mór.

Emigrants from Liverpool could only board their ship on the day before or the day of sailing. Many would spend a short time in Liverpool, often using lodging houses. In the late 1840s and 1850s, emigrants would be targets for conmen and thieves, with accommodation often dirty and overcrowded. In 1851 Liverpool Port Authority considered a purpose-built depot for emigrants, close to the Irish steamer terminal at Clarence Dock. However, the plan was never realised.

Irish immigration to America had two main routes; transatlantic sailings to east coast ports such as Boston and New York, or via Canada by land or sea. Fares to Canada from Great Britain and Ireland were cheaper than those to America, particularly after 1847. Some emigrants chose
to settle in Canada, while others continued their journey to America.

Voyages to America and Canada, on a sailing ship, would take around 35 days. Most emigrants could only afford the cheapest ticket, in steerage. This accommodation was akin to a dormitory, having beds at the sides and tables down the middle. This space was often overcrowded and poorly ventilated, allowing diseases such as cholera and typhus to spread rapidly throughout the decks. Treatment was scarce and many died during the transfer.

No official lists of passengers from the time of The Great Hunger have survived. At that time, emigrants did not require any form of passport or application to travel from Great Britain or Ireland.

The Tighes were one of the tenant families from the Strokestown estate, County Roscommon to make the long, arduous journey from Ireland to Canada. Some 1,490 people walked from the Strokestown estate to Dublin, 165 km (over 100 miles). On arriving in Liverpool, they were given passage on The Naomi. On arrival at the Quebec quarantine station, the only Tighe family to have survived were Daniel, age 12 and his younger sister Catherine. They lost their mother, uncle (William Kelly) and three siblings on the crossing, meaning of seven, just two made it to America with no adult to care for them in a new world.