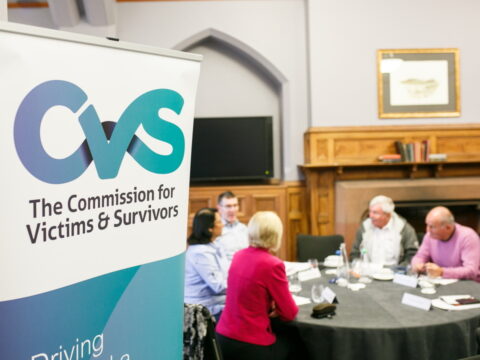 A chance meeting at a funding session led the Festival to be introduced to the Commission for Victims and Survivors, who -interested in the Festival’s work with dual heritage Irish lives, women and other marginalised groups- opened complex discussions about trauma and reconciliation. Ultimately, this introduction has opened an ongoing exchange in which we will learn how to work together to continue important reconciliation work. This, and our event Hard Histories, Positive Futures with Patrick Kielty, mark the first step in that exchange.

Exchange. A word with a relatively simple definition of giving and receiving. We hear it often when speaking of gifts, trade and currency. But what does “exchange” look like for a country recovering from over 30 years of conflict?

At this year’s Liverpool Irish Festival, the comedian Patrick Kielty and Northern Ireland’s Commission for Victims and Survivors explore notions of identity and recovery after adversity. They will consider why building dialogue, exchanging views and understanding the many complexities of the human experience can help people not just heal, but pave the way for a more inclusive and compassionate society.

For the Commission for Victims and Survivors, exchange is at the heart of all of its work.

Patrick has been no stranger to hurt and loss resulting from the violence in Northern Ireland. Having lost his father just days before his seventeenth birthday, Patrick has spoken often of his vision for a more reconciled Northern Ireland. At a time when discussing the difficulties and nuances of life in Northern Ireland was still treated with trepidation, Patrick was a leader in using the subject as material for his comedy work. In 2018 Patrick also presented a documentary, My Dad, the Peace Deal and Me to mark the twentieth anniversary of the Good Friday Agreement.

In 1998 Northern Ireland was a very different place to today. Governments internationally had committed to helping broker peace on the island of Ireland, which culminated in the Agreement. Only following 10 years of the peace process and the learning that generated, could the Commission start to address victim’s needs at government level. At the time, such an undertaking was still in its infancy. This was to be a new era of learning and teasing out issues; psychological and social. The decade between 1998 and 2008 prioritised a new and relative peace, addressing ‘the new normal’. This peace was to be the foundation upon which to build economic prosperity and a thriving tourist industry; victim’s needs had not yet been seen as central to that process.

In the spirit of ‘nothing about us without us’, the Commission established a Victims and Survivors Forum. This group of individuals -harmed in different ways, by varying aspects of conflict and The Troubles- embody the generosity of exchange needed to better understand the experiences of “the other”. They guide the Commission in its policy and research work.

For the Commission and its Forum, exchange is about such generosity and dialogue. It is hearing and understanding complex views -about a past much contested- and finding a way to mediate political ideologies and lived experiences to pave a way forward that benefits social cohesion. This is no mean feat as the issues they deal with go right to the heart of identity and culture – issues often at the root of division. The Commission and its Forum are deeply committed to the importance of that dialogue, no matter how uncomfortable, and to making compromises to find the common ground they can all stand on. In the words of one Forum member ‘it’s no good waiting for perfect, we have to do what we can here and now’.

So, why do these issues still matter over 20 years from the Good Friday Agreement?  And what relevance do they have to the Irish here in Liverpool? In the discussion, Patrick Kielty and two members of the Victims and Survivors Forum explore the many facets of Irish identity, culture, heritage and belonging. Of what it is to people to be Irish, Northern Irish, British and the other “ish-es” that make up the essence of “us”. Of how victims can have a positive impact on inclusivity, of shaping public spaces and ensuring that the arts and culture are used to create a thriving environment, which can simultaneously mark the past and indicate a brighter future.

They will consider how the unaddressed needs of truth recovery can stymie growth and transition from victim to survivor and ‘thriver’, delving into the notion of untold identity stories beyond “neat” conflict narratives.

Amongst those lesser heard stories is the English perspective. When the governments of Ireland, Northern Ireland and first sought to deal with societal issues arising from the conflict, the approach centred greatly around those from or resident in Northern Ireland. But what of the British Army veterans -or their widows- who served in Northern Ireland?  Or those in Warrington, Manchester, London and Birmingham whose lives were shaped by events that unfolded as a result of Northern Ireland’s conflict?  What are the prejudices faced by Irish people, and the children of Irish people, in Britain today as a consequence of The Troubles and memories -or received understanding- of the conflict?

The Commission’s passion for understanding this rich tapestry of different needs and experiences boils down to one simple factor: when dealing with human beings, no two experiences are the same. In understanding this, the Commission can better fulfil its objective to represent all victims, and ensure a better future for the children and grandchildren of victims and survivors.

Today Northern Ireland still enjoys relative peace, but the past’s impact can still very much be felt in the present. Political power-sharing still relies on very traditional nationalist/unionist allegiance amongst Northern Ireland voters. Education, housing and even sport are still very much segregated, whilst issues like Brexit amplify many pre-existing tensions. These are issues that remain difficult to address despite with the passage of time. The people of Northern Ireland are deeply committed to a long and lasting peace, but with the world’s gaze now diverted from Northern Ireland, are they yet able to pave this new road alone?

To learn mor abou the work of the Commission, we recommend atending our event, Hard Histroies, Positive Futures with Patrick Kielty on 17 Oct 2020, which you can find more about using this link.