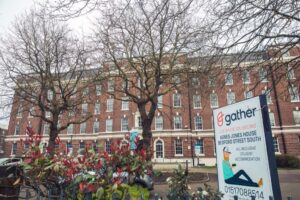 On 14 Oct 1926, the Lady Mayoress of Liverpool laid the foundation stone of a new women’s hospital in Catharine Street. This new building housed the amalgamation of the Women’s Hospital on Shaw Street with the Samaritan Hospital for Women on Upper Parliament Street. The latter hospital had been opened in 1895 in Upper Warwick Street and had operated at various addresses until 1900, when it settled at premises in Crown Street/Upper Parliament Street (see Bickerton). The Catharine Street Women’s Hospital was finally closed in 1995 and redeveloped in to student accommodation, which involved demolishing all but the hospital’s administration block. It was named Agnes Jones House, when it reopened.

The Women’s Hospital -or Agnes Jones House- has little direct Irish or Irish Famine connection. Previously health and maternity care for women would have been provided by The Ladies’ Charity and by The Lying-In Hospital and later the Women’s Hospital on Shaw Street. The building’s namesake, Agnes Jones (1832-1868), had family connections to Fahan. She lived through The Great Hunger, having direct contact with large numbers of people in need, post-Famine, having become the first nurse Superintendent of the Brownlow Hill Workhouse in 1965. Her influence on reforming the workhouses, which previously exacerbated the suffering of those in need, makes her worthy of note in the Trail.

Agnes Jones was born on 10 November 1832, in Cambridge to a wealthy, Christian family. Her father’s military career meant that the family frequently moved from the family seat in Fahan, Donegal to postings around the world. Agnes was educated in Stratford-upon-Avon. In 1850 her father died and Agnes returned to Fahan to look after her ailing mother and younger siblings. This was her first experience of nursing, leading her to care for the poor and sick in the local area, too. Three years later, in Germany, Agnes decided she wanted to become a nurse following a visit to Kaiserswerth (City of Düsseldorf) where she saw schools, orphanages and hospitals. In 1860 Agnes returned for training to work in orphanages, hospitals and as a governess. Upon her return to England, Agnes worked in a missionary and in a girl’s dormitory school. Her ambition
to become a nurse never faded. In 1862 Agnes enrolled in the Nightingale Training School at St Thomas’s Hospital in London, established by Florence Nightingale in 1860. Florence Nightingale would later refer to Agnes as “our best and dearest pupil”.

After completing her training, Agnes started at the Great Northern Hospital, London. At this time, professionally trained nurses were not widespread and not employed in institutions such as workhouse infirmaries.

In Liverpool, William Rathbone (1819-1902), and his first wife Lucretia (1823-1859) were involved in social campaigns and philanthropic work. When Lucretia became ill, Rathbone sought a private nurse to care for her at home. After Lucretia’s death in 1859, Rathbone campaigned for improvements in nursing care. Such work led Rathbone to witness
the appalling conditions inside workhouse infirmaries. Rathbone approached Liverpool’s select vestry for permission to introduce trained nurses to the workhouse infirmary, in place
of unsupervised pauper girls and women.

He proposed to fund this pioneering scheme himself for three years. Permission was granted and Rathbone wrote to Florence Nightingale seeking a recommendation for a potential superintendent; that someone was Agnes Jones. Rathbone wrote to Agnes, asking her to leave the Great Northern Hospital and take up a position in the Brownlow Hill Workhouse infirmary.

At the start of 1865 Agnes moved to Liverpool, to begin the new role. Agnes established and oversaw a training school (akin to Nightingale’s) with 12 of the first newly qualified nurses from the Nightingale School. In addition, Agnes trained and supervised seven Nightingale School probationers and 54 female inmate assistants, who received a small salary to work as nurses in the infirmary. This scheme paved the way for similar training in workhouses countrywide. After the initial three years, the Liverpool select vestry were able to see the results and agreed to continue funding the programme.

A typhus fever outbreak in Liverpool, in 1868, saw a surge in cases and the need for hundreds of extra beds. This led to a huge increase in staff workload, leading to staff illness and fevers. Perhaps inevitably, Agnes succumbed to the fever, developing inflammation in both lungs. She died of typhus on 19 Feb 1868, aged 35. On her death, Florence Nightingale wrote to the infirmary nurses asking them to continue the work of Agnes Jones. Shortly afterwards a Workhouse Nurses Association was formed, pre-empting reforms and improvements that slowly led to better conditions and relief for the sick and the poor in the latter part of the century.

A stained-glass window is dedicated to Agnes Jones in the Lady Chapel of the Anglican Cathedral and a statue in held in the Oratory. There is also a memorial in Walton Hospital’s chapel, which was originally in the Brownlow Hill Workhouse, but was moved in 1928.