Festival friends will know that, since 2016, we’ve run a strand of work known as In:Visible Women.

Initially responding to #MeToo, and the unveiling of several institutional scandals, our programme has considered individuals, mixed-race families and folkloric goddesses. Along with many others, we started celebrating St Brigid’s Day (1 Feb) a few years ago. Since then, the Irish Government have awarded her a public holiday in Ireland, to be observed nationally from 2023. Each year, we tell stories of Irish women, because so many have been undocumented or remain in the shadow of male counterparts.

In the second of a series of three stories, to be revealed over the next six months, artist and storyteller Maria Crean unveils the story of another Irish female powerhouse. This time, we hear about Macha and her inconcievable strength and wrath.

To see Maria’s first story –Queen Medh– use this link.

The name Macha is given to more than one vengeful female in Celtic mythology. Perhaps the most notable Macha -with her sisters Badb and Nemain- make up the Celtic triple goddess of war and death, ‘The Morrigan’, often represented by a raven. To stumble across Macha, washing bloodstained clothes in a river, foretells the impending death of the witness.

The first Macha was wife to Nemed of the Tuatha Dé Danann. When gifted a field by her husband, her prophetic gifts revealed it to be the site of the bloody carnage of the Cattle Raid of Cooley.

The second Macha was a flame-haired, fiery tempered and unforgiving leader. Her father, King Aed, shared his Kingship with two others -Dithorba and Cimbaeth- on a seven-year rotational basis. After King Aed drowned, Macha demanded her crown. However, the others refused to serve alongside a woman.

Macha took to the battlefield and won. Afterwards, she humiliated the defeated troops of her opponents by demanding they build temples in her honour. When Dithorba and Cimbaeth’s sons arrived to reclaim the Kingship, after seven years, Macha reminded them that the crown was in her hands not by favour but by force and on the battlefield, she would retain it.

Most well-known is Macha, wife of Cruinniuc, whose curse was later utilised by Queen Medb. Cruinniuc, a wealthy widow, was struggling to care for his land and children. One day Cruinniuc returned home to find it immaculate; the children bathed and a beautiful woman cooking dinner. Uninvited but not unwelcome, the Goddess Macha had bestowed herself unto his home in human form.

Appreciative, Cruinniuc accepted this strange situation without a second thought and the two began to live as man and wife. Macha’s only demand being that Cruinniuc keep her presence secret. In return, while they were together, the house knew no need or want and Cruinniuc’s wealth continued to grow (along with Macha’s fertile stomach).

Cruinniuc watched Macha lift more than his best work horses and outrun the fastest hare, with growing suspicion and unease. Yet, still he found himself dogged by an insatiable urge to share his mysterious good fortune. Thus, the time came when Cruinniuc would break his promise.

The King of Ulster held a large fair for notable locals, including Cruinniuc. Lips, loosened by free-flowing mead, Cruinniuc began to boast that his wife could run faster than all the King’s horses combined. Overhearing this, a furious King Conor (King of Ulster) demanded that Macha be brought before him immediately to prove herself. The colour drained from Cruinniuc’s face as he pleaded for mercy for his heavily pregnant wife.

King Conor, was not one to be humiliated. He detained Cruinniuc on threat of death, whilst officials dragged Macha from her home.

Macha was days from giving birth. She cradled her large, round stomach as she looked around the spectators spitefully. Would no one call an end to this outrageous display of men’s bravado? Cruinniuc pointed out that the race would likely endanger Macha’s life and that of their unborn twins.

Initially King Conor had considered Cruinniuc a drunken old fool needing put in his place, but something about Macha’s scathing presence in the arena filled him with unease, and he began to fear that the rumours about her divinity may be true. Undeterred, the King stripped his best horse of all armour and fashionings to increase its speed.

As race preparations began, Macha pleaded with the crowd of Ulstermen around her; “Help me, for each of you came born of a mother!”. Not even her husband defended her this time. She begged them to postpone the race, until after the birth of her children, when she insisted she would indeed run faster than any royal steed. Laughing, the men of Ulster hollered and howled for the race to begin.

Despite the frothing steed running with all its might, Macha still managed to cross the finish line first, accompanied by a great shriek of pain. It was there she birthed her twins, a boy named Fír (True) and a girl named Fial (Modest). Exhausted, humiliated and furious at what she had been put through for the entertainment of drunken and prideful men, Macha cursed the men of Ulster.

The toll of the race and the birth was too much. With her dying breath Macha decreed that -at the time of their greatest need, when danger threatened the survival of the province- the men of Ulster would be as weak and helpless as a woman in childbirth. The curse would last for five days and four nights on each occasion and nine times for nine generations.

Queen Medb later relied upon this to gain the upper hand during the Cattle Raid of Cooley.

Ulster is Macha’s territory. It’s said she cleared the plains around Armagh (Ard Mhacha/The Heights of Macha) for the growth of wheat. The place where she birthed her twins, and met her end in Armagh, was christened Emain Macha or ‘Macha’s Twins’, and is now known as Navan Fort. 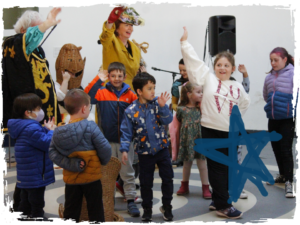 22 October 2020
This website uses cookies to improve your experience. We'll assume you're ok with this, but you can opt-out if you wish. Cookie SettingsAccept
Manage consent