The River Festival returns this summer with a bounty of treasures for landlubbers and seafarers alike.

Liverpool Irish Festival are proud to have been recommissioned by Culture Liverpool to produce events for this showcase. We have a raft of music on board La Malouine, a series of dance delights for the Martin Luther King Jnr stage and other sessions for Salthouse Quays. We’ve got shanty singing, bands and acoustic sets open to all. Everyone is welcome and we hope you will enjoy the River Festival’s tall ships and variety of brilliant and engaging works, which include: giant sea urchins, a view of the earth (Gaia), the Bordeaux Wine Festival, Indian dancing (Milapfest) and even shipwrecks (more here).

You can see our own event listing and schedule for Sat 1 and Sun 2 June 2019 using this link. Meanwhile, biographies for all those involved in Liverpool Irish Festival programmes can be found below.

Anti-Shanty is an international singing ensemble based at Liverpool John Moores University, specialising in sea shanties (ship-board work songs from the nineteenth century) associated with Liverpool. As their name suggests, Anti-Shanty retain a slightly less than reverend attitude towards the tradition, and are quite happy to mix things up a bit, genre-wise. They say singing is good for the soul; singing Liverpool-based sea shanties is even better. Come and sing along with Anti-Shanty!

Celtic Knot Ceilidh Band have played together as an instrumental folk band for over a decade and focus on Irish, Scots and English Ceilidh msuic. With toe tapping tunes, brilliant energy and often a dance caller, you can be sure of a great atmosphere when listening to this group.

Former Beatelle, Catherine has been a regular on the Liverpool music circuit for over a decade and has played n some of the most prestigious Beatle’s events around the world, including five International Beatleweeks. After starting a family and taking herself solo, Catherine performs weekly in several Liverpool venues focusing primarily on either Irish Traditional songs or music from the 60s, ranging from Del Shannon, Bob Dylan and some old Liverpool heroes.

Established by George Ferguson (World Champion 1972), this dance school participates in many events throughout the year, representing Liverpool’s strong connections with Irish traditions. As proud ambassadors of Ireland’s rich heritage, they have appeared on numerous TV and theatre shows. Catering for all levels of dance -from beginner to advanced- George always provides the first class for free! His dancers are some of the best and you can always be sure of interesting commentary of the history of the dances as well as exceptional quality dance. Details are available on Facebook (+44 (0)7771884724).

Jo and John play together as music instructors for Melody Makers. Jo is an exceptional fiddle player (known for leading the Giants around Liverpool on a truck of violins to over a million visitors) whilst John’s specialisms are guitar and mandolin. Both are experienced folk musicians and play numerous other instruments and in groups including Cream of the Barley and Calico, celebrating their Celtic roots. Their music blends traditional and contemporary styles to create their own mix of songs and tunes, which ensures the Celtic tradition is alive here on Merseyside. They are delighted to be performing at this year’s Mersey River Festival.

Audiences everywhere rave over the harmonies of Kimber’s Men, having appeared at festivals across Europe and the UK, twice on Sunday Brunch (Channel 4) and on BBC2 and 4’s production of Sea Songs, with Gareth Malone.

John Bromley is a folk song singer, guitarist and solo artist, additionally playing whistle and bodhrán. Neil Kimber plays guitar. Neil and Ros Kimber composed the wonderful song ‘Don’t Take The Heroes’, now sung by shanty bands all over the world. With a powerful and bluesy voice and accomplished guitar skills, Gareth Scott brings another dimension to Kimber’s Men’s sound. Steve Smith (sound engineer) recorded and produced their latest album and -as multi-instrumentalist- completes the group with his high harmonies. Expect to laugh, sing and be generally entertained.

Mick O Brien (Wexford), Gary Lawlor, Paddy Mangan and Zak Moran (all from Kildare) make up The Druids, an award-winning Irish act, on a nationwide tour, celebrating 10 years of gigging. Winners of the best live act at the Irish Folk Music Awards 2017, they are in high demand, constantly internationally, throughout Europe and the UK and bringing their unique style and passion to some of Ireland’s greatest folk songs and stories with expert musicianship, vocal ability and performances. Established and based in Co.Kildare in 2008, The Druids are a household name in Ireland.

“The Druids entertain and educate while having the audience on their feet”, Patrick Johnson, Irish Music Cafe radio show; Detroit, Michigan, USA.

The Folk Doctors are Merseyside/Irish duo John Armstrong and Ultan Mulhern. The band grew out of a collaboration on a song –No Place I Call My Home– for the Liverpool Acoustic Songwriting Challenge in Autumn 2016. John composed music for Ultan’s lyrics and performed them on the recorded entry. Spin forward to release of Silent Shores in 2017 and you start to hear their incredible storytelling unfold about builders and soldiers, rainfall and whistle-blowers, lucky beggars and the downtrodden.

“”To breathe in the air of Silent Shores, [is] to know that for a time the only company you have, and need, is your own thoughts and a great Folk album playing in your ears”, Liverpool Sound and Vision.

The Wee Bag Band’s raison d’être is to bring mad, bad, trad, popular and contemporary Irish Celtic  music and song to the masses at pubs, clubs, parties and festivals, primarily in North Wales and the UK. However, their music has taken them to many parts of the world including the UK, France, Switzerland, Spain, Germany, USA, Cuba, Bahamas, Puerto Rico, Honduras and even northern Greenland. This is a real high energy team, with lots of laughter ringing out between members and audiences! 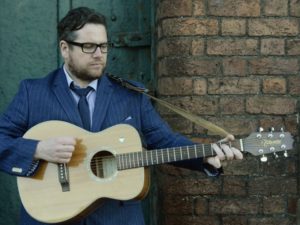 These presentations are commissioned by Culture Liverpool from the Liverpool Irish Festival. We are delighted to be involved in this wonderful event and grateful for the City Council’s continued support.