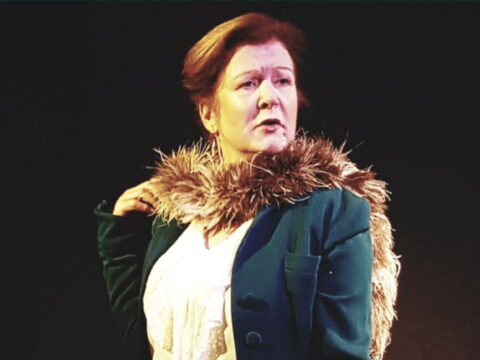 In:Visible Women have long been a focus of the Festival. We’ve seen many unveiled over the years; often the equally strong partner of a famous man (such as Constance Markievicz or Maude Gonne). Alternatively, they have had their light diminished because they did not fit the social-stereotype (Eva Gore-Boothe) or threatened the patriarchal order (Kitty Wilkinson) or their time. Gradually they are coming in to the light. Here, Helix Productions offer some additional background to their play Mrs Shaw Herself, a production we are moving in to the digital arena for #LIF2020 and hope you will attend.

Let’s face it, this does not sound the most romantic start to a marriage; especially if you throw in that the groom and bride were both over 40 with a disdain for -if not downright aversion to- sexual activity. Add further that the groom was one of the most famous men in the world, at that time, and an avowed philanderer (albeit more on the page than in the sheets) and we can but wonder at how this marriage lasted over 40 years, ending with Charlotte’s death. Shaw once said “I could never have married anyone else”. So how is it that we know so little about her?

Creators and performers of Mrs Shaw Herself –Alexis Leighton and Helen Tierney- have found that after performances of the show, audience members frequently come up to tell them they were in fact unaware Shaw was married. Yet Charlotte’s is a fascinating story. It was a mammoth achievement to stay married to the Nobel Prize and Oscar-winning Shaw, in itself, but Charlotte needs to be remembered and indeed celebrated for so much more.

Like Shaw, she played an active part in the early Fabian movement, but it was her money -and it is her name- which gave the London School of Economics their beautiful Shaw Library. She gave financial assistance to many women who were studying medicine and supported the suffrage movement. She not only assisted Shaw with secretarial work, but in his research for plays; notably St Joan. Shaw thanked her with a commission of a St Joan statue to grace their garden at Ayot Saint Lawrence. She read voraciously and enjoyed an intimate and frank relationship with T.E. Lawrence, taking on a quasi-maternal confidence with him in letters.

Shaw and Payne-Townshend’s story is the most maverick of Irish love stories. Charlotte was born in Cork to an incredibly rich family; by coincidence George had worked briefly as a clerk in a land-registry office, owned by her family firm. She had given up on marriage, after failed love affairs, when she met Shaw and our show tells of the twists and turns of their courtship, noted by eagle-eyed Fabian Beatrice Webb. The marriage had its challenges. Shaw could not resist a pretty face and whilst it hardly ever led to physical contact, Charlotte sometimes felt the need to take him on long holidays abroad just to get him away, especially from actresses. Shaw’s infamous affair with Mrs Patrick Campbell was a particular low point, but the marriage weathered it and if nothing else, Mrs Shaw Herself is a lilting (and sometimes keening) Irish song of praise to the long-haul of marital love.

The Liverpool Irish Festival’s theme of “exchange” is embedded in the story of Mrs Shaw Herself. Both Payne-Townshend and Shaw exchanged Ireland for England, but never lost a sense of their roots. They were prominent in support of a united Ireland and of Roger Casement. As Irish Protestants in a sea of Englishness their outsider status brought with it an independent, if not downright maverick stance to life and matters; it is this element that many love in Shaw’s plays. Charlotte exchanged -as did George- a life-long suspicion of marriage for a compromise in what seems to be a celibate, but ultimately loving and supportive relationship. He did not exchange, however, her feminist stance and her determination to use her fortune -in part- to better the lives of women and, most importantly, to create systems for that. The care she took in supervising her scholarships at the LSE and the London School of Medicine is quite astounding. Whilst researching the play, Leighton and Tierney were given access to the wonderful collection at the LSE of photos taken by Shaw. You get a real sense of partnership and affection through the pictures; this between two very independent people.

Mrs Shaw Herself has been performed in many locations; cathedrals, theatres, libraries, centres and even at the wedding of Charlotte’s great-great niece Elisabeth Townshend. It was good to hear Charlotte’s words ring out in the Shaw Library for a conference on women at our LSE performance and at the church in Shaw’s home village of Ayot at which the organ, which Shaw occasionally played, sounded at Charlotte’s funeral scene as described in Shaw’s letters. We have taken the show to various festivals including Bloomsbury, Edinburgh, Crouch End, Watford and Bury St Edmunds, but it is wonderful now to bring an online version of the show to the Liverpool Irish Festival. Do come and hear the voice of the woman who was not only Mrs Shaw Herself, but so much more.

Mrs Shaw Herself is performed at the Liverpool Irish Festival at 8pm, Wed 21 Oct, online. Click here to book tickets, whilst available.

In:Visible Women come to the fore…
Irish in Britain