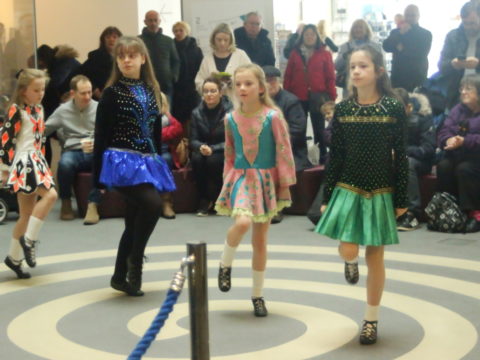 George Ferguson is a linchpin of the Liverpool Irish community, known to many Liverpool Irish families -across recent decades- for his work with hundreds (maybe thousands) of dancers. His school turns 40 years old in 2019 and in honour of this, we asked George to think about his journey to founding the dance school and what it has meant to him. George picks up the story…

In 1966, at the age of 11, I was taken to watch my sister attend her Irish dance class and unbeknown to me, my Mom supplied the two shillings and sixpence needed, to give me a lesson also. By the end of that lesson I could dance The Reel completely and to music! The dance teacher, Marion Turley told mom that I was ‘a dancer’ and, despite several efforts, I have never escaped since then. The Turley Academy is renowned worldwide for world champion dancers and produced Colin Dunne, nine times World Champion, who famously took over the lead in Riverdance, at two days’ notice, when Michael Flatley left.

Both of my parents are Irish; Dad from Fermanagh and Mom from Mayo, so all summers were spent between the two counties, but mostly in Mayo. As dancing was on both sides of the family it followed that we would continue the tradition.

I started the usual round of Feisanna (competitions) in the Midlands (as that was where I was born and brought up), Coventry specifically. Rising through the medals, I attended my first World Championships in Dublin, which was a terrifying but great experience. The following year I attended the All Ireland Championships (again in Dublin) and placed third. Later that year I won the Arch Bishop Langley Feis, defeating the reigning World Champion. In 1972 I returned to the Mansion House (Dublin) to win the World Championship for myself. Two months later I came to the Liverpool Feis and won the first of three consecutive Senior Championships victories there. Having completed my A-levels I gained a place at Liverpool Art College for a one year course. I fell in love with the city and have stayed ever since.

I obtained an art teaching position at Deyes High School (Maghull) and set up the dance class, having passed my Teagascoir Choimisiuin le Rinci Gaelacha (TCRG– essentially the Commission for certifying Irish dance teaching). I undertook my Irish Dance teacher exams in Dublin. In April 1979 -at St. Anthony of Padua, Mossley Hill, Queens Drive- I started with eight dancers on the first night and grew to 40+ quite quickly. We started attending Feisanna and eventually ended up with three classes across the city. We took teams and solo dancers to local Feisanna and National and World Championships in various venues throughout England and Ireland .

As the recession set in, parents were reluctant to attend the Feisanna due to the cost. We had a survey and decided that there were other aspects we were more interested in, rather than relentless competitions. We concentrated on shows, displays and exhibitions, ranging from TV appearances on programmes such as BBC’s A Question of Sport where we danced with John Aldridge, the Liverpool and Irish Republic footballer. Last year (2018) we performed at the Vince Power’s Liverpool Feis, an Irish music festival held at the Pier Head. Headline acts included Van Morrison, Shane McGowan and Liverpool’s own, Nathan Carter! More recently we performed at the Epstein Theatre with local musicians and the legend of comedy that is Jimmy Cricket in An Irish Hooley, a variety show that featured on the TV program The Irish in the UK. We have even danced for the Sunday Politics show, which must be a first for Irish dance!

As for me, I performed my last dance to celebrate 50 years of St. Patricks Day performances at the John Mitchell’s GAA presentation dinner dance at the Crown Plaza Liverpool, for the GAA President on 4 March 2017.

Irish dance has changed markedly over the years. Costumes, hair and steps have responded to the impact of shows, started by Riverdance. Some would say that since Irish dance is now not the sole domain of those of Irish descent or origin; that it has moved away from its roots and traditions. It has to be hoped that these traditions are not lost for the sake of progress!

From now on it’s over to the next generation of dancers and hopefully my daughter, Cecilia, will continue when I eventually leave off and keep the Ferguson School name going. I know it will be in good hands!

It has been an honour and a privilege to have been involved with generations of dancers and their families, through 40 years of the medium of Irish Dance.

To find out more information about George’s school and his classes, log on to Facebook and search for /George-Ferguson-School-of-Irish-Dance. Alternatively, you can call George direct, being mindful of standard working hours, on +44 (0) 777 188 4724.

George’s dancers will perform at 3pm at the Family Day (Museum of Liverpool) on Sat 26 Oct 2019. An anniversary celebration will also be held, in George’s honour, at the Liverpool Irish Centre on 11 Oct 2019