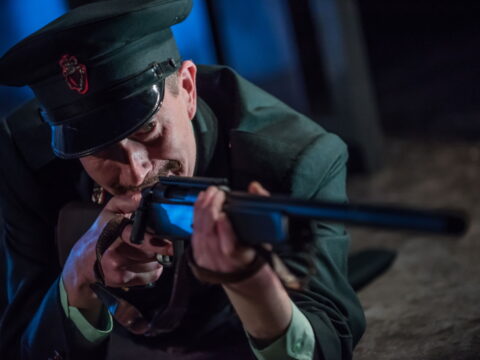 Kabosh were introduced to the Festival by the Commission for Victims and Survivors.

Our original intention was to bring a production to Liverpool, but “the best laid schemes o’ mice an’ men, gang aft a-gley”, as Robert Burns famously stated. Instead, we take  a look at how arts exchanges can inspire, provoke and confront reconciliation principles, rated to conflict resolution.

Founded in 1994, Kabosh is a Belfast-based theatre company that creates original work -for performance- in a range of spaces. Each project is inspired by the people, spaces and places in the north of Ireland and most of the work addresses the legacy of our violent conflict. We aim to humanise those we perceive to be ‘other’, thereby challenging preconceptions. We aim to create work of high quality that provokes informed discussions around sensitive themes of reconciliation. It is theatre for positive social change.

The Kabosh canon is commissioned from professional Irish playwrights, but the method of gathering source material varies. On each project the company works with a community organisation to provide introductions. They assist with identifying source material, developing grassroots partners, co-facilitate post-show discussions, liaise with community gatekeepers to maximise engagement and provide long-term support to audiences.

Often a project is the result of a playwright creatively responding to an oral archive undertaken by a community agency. The archive then becomes the catalyst for a fictional drama. The gathered stories are not presented verbatim. This ensures both the original keeper of the story -and those who have never heard the narrative before- are challenged and encouraged to engage with it.

Individuals exchange their memories with artists, who reimagine these narratives and exchange them with audiences. This motivates informed reassessment. Attitudinal change is measured.

Arts in the aftermath of conflict is essential in opening dialogue between communities. It bears witness to those we perceive to be ‘other’, challenging perceptions and building bridges through education and shared histories. Staging an alien narrative in a community setting allows for safe conversations that examine volatile issues around lack of integration.

Difficult subject matter can be explored by professional actors, as they are perceived to be neutral, outside of the community. They can embody controversial characters, give voice to polarised thoughts and aggressively challenge what is considered acceptable, because the public don’t consider them to be from a specific community, with an inbuilt loyalty or even carry personal baggage.

Many of the projects also serve to become catalysts for new stories. Audiences recognise that their voice is under-represented and feel motivated to share. Kabosh is constantly adding to its canon of post-conflict work motivated by community interest.

In recent years Kabosh has toured work about the conflict in the north of Ireland to Nigeria, South Africa, Rwanda, Belgium, Germany and France. As with local performances, the performances led to informed, emotive conversations about the legacy of conflict, personal impact and hope for the future. Experiencing human narratives involving international conflict resolution provokes a reassessment of personal context. We remind audiences that memories are fluid, malleable; making positive change possible. In addition, methodology is transferrable across borders. It is empowering to exchange the role artists can play in challenging myths; confronting prejudice, representing trauma and ultimately assisting individuals process the legacy of conflict.

The language of conflict and post-conflict is universal. We are dealing with the same issues: how can we move on without betraying the memory of a loved one or our community? How do we avoid passing bitterness on to the next generation and repeating a cycle of violence? Is it possible to draw a line under the past or must we forgive? Does that mean forgetting? How can we reconcile oneself with the terminology of ‘post-conflict’ e.g.,  as victim, survivor, perpetrator, etc.? Can we reimagine new possibilities for policing, justice or social structures?  Conflict can seem parochial, but is easier to consider your own history by engaging with another’s? Theatre is an ideal live, humanised, communal medium for this exchange.

Kabosh projects seek to assist communities deal with the legacy of conflict through provoking new conversations.

Liverpool Irish Festival sincerely hope to bring Kabosh to Liverpool in future years to experience, first hand, the fruits of their work, understanding and commitment to truthful storytelling, reconciliation and care.

Based on an oral archive of serving Royal Ulster Constabulary (RUC) and An Garda Síochána police officers, Green & Blue explores the realities faced by the individuals who patrolled the Irish border during the height of the conflict.

The title of the play reflects the colour of the two police uniforms: green was worn by the RUC in the north and blue was worn by the Garda in the south. It also reflects how we see the uniform and not the person, and how the policemen see themselves as uniforms, as this extract from the play indicates:

GARDA O’HALLORAN:              At one point we took on a role that became an identity and that identity now defines us. I’m no longer Eddie nor you David. I’m a Guard; you’re a Peeler. We’re a uniform, not real people. And rightly or wrongly we now view the world from that perspective.

Green & Blue looks at the person behind the uniform and the different experiences of the individuals on either side of a man-made line in the ground; ‘…a simple but effective way of exploring two sides of one conflict’ – Belfast Telegraph

As Laurence McKeown is a Republican ex-prisoner and former hunger striker there were members of the ‘police family’ who found it difficult to come to terms with Laurence being appointed as playwright for the project. Through engagement in the two year process and/or experiencing the production over four years, many preconceptions were effectively challenged. Other communities were encouraged to engage with the narrative because of Laurence’s past. The ultimate consideration was how to nurture a trust based on integrity and an acceptance of different histories.

To date this production has toured extensively across Ireland playing prisons, theatres, community halls, historical ruins and schools, as well as being presented in London, Brussels, Edinburgh, Dresden and Paris.

Using a project feedback form we measured attitudinal change against by asking audiences to complete a before and after questionnaire, ranking their level of agreement with a series of statements:

Based on the trends emerging from the freeform feedback, and the attitudinal changes measured, the major impact of the project is on affecting levels of sympathy and empathy with those in uniform.

A high number of comments describe the unusual position of hearing a police officer’s story, or -when that story is familiar-hearing it from ‘the other side’ and recognising that those in uniform occupy a third or ‘other’ community space/role. For example:

As the son of a garda who served on the border during this period a lot of the garda perspective resonated with me. I did get a new view of the RUC which was refreshing

I found the play extremely interesting, I’m not sure I’ve ever heard the words before, of an RUC officer and his Irish counterparts. The play is vital in the small footsteps we are taking towards dealing with the past, as well as the future. We will only embrace the future when we have given space and a voice [to those] who lived through the conflict. Until then, we are surely sweeping the past under the carpet

Audiences have also referred to how their experience has/will impact on contemporary issues such as changing their attitudes towards police officers today, seeing beyond ‘the Uniform’, and the importance of work like this in positively contributing to peace building.

Green & Blue is one of many Kabosh projects that seeks to assist communities deal with the legacy of conflict through provoking new conversations.

Lessons of War: Matt McGinn
A view from without: Kilkelly