Theatre is a huge part of Liverpool Irish Festival, especially with so many stories to be told and incredible Liverpool and Irish writers to tell them.

There’s compelling tales of history, of 1916 and The Troubles, of laughter, surrealism, of strong women and gamechangers, and, of course, a play inspired by Stephen Nolan.

Liverpool and Irish theatre is flourishing. Our programme is designed to showcase some of the finest established and emerging talent coming from places you might not expect. We’ve homegrown talent from both sides of the Irish Sea almost every night until the festival finishes.

Here’s the plays coming up this week …

#LIF2018 presents Baggage and When Nora Met Jim. Both plays have been written in Liverpool and feature local actors.  Expect this presentation to be low-fi in terms of tech, but high-fi in terms of impact. Strong performances, resonant texts and compelling stories.

Set in the midst of ‘The Troubles’, Rat in the Skull centres on an interview between a Royal Ulster Constabulary inspector and a young Catholic man in London detained under the Prevention of Terrorism Act.

Told from the point of view of an Ulster Protestant, it casts a new perspective on the struggle. Their sectarian differences fall away when confronted with ‘casual loathing’ of their English counterparts. 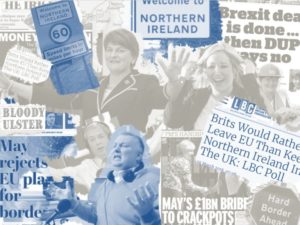 The Democratic Unionist Party (DUP) are tied up in government with the Tories. GB is about to crash out of the EU. Polls show London and Dublin would rather the other deal with Northern Ireland, whilst international headlines scream ‘medieval province’.  Hardly great craic!

So, when an unexpected discovery changes the fortunes of Ulster, will people be ready for the emergence of Northern Ireland as a global superpower? Inspired by the infamous daily radio phone-in The Nolan Show, ‘The Biggest Show in The Country is a dark musical comedy that swaps guns, bombs and bullets for glitter, banter and ballads, whilst exploring what it means to be Northern Irish in 2018, 20 years after the Good Friday Agreement.

This is a rehearsed reading of the script, not a full production. It is an opportunity to see artists at work and get an early insight in to the theatre making process. 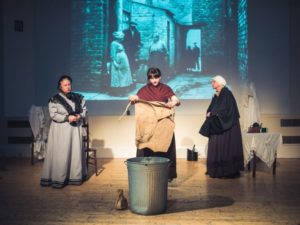 Commemorating the significant influence Kitty played in Liverpool by helping to turn the tide on an epidemic spreading through the city; cholera. Echoing many of the class and gentrification issues still at large today, Kitty’s indefatigable work to help the poor of Liverpool in the face of terrific adversity continues to show how migrants help their destination cities, sometimes in unimaginable ways.

A new play with songs by Lizzie Nunnery. Easter morning, 1916. Gunshots ring out in the Dublin streets. In her suburban sitting room Hannah prepares for revolution. While Frank walks through the crowds calling for peace, John walks through his nightmares of the trenches, sees a city soaked in blood. 18-year-old William fearfully reports to the barracks for duty, determined to serve the British army with honour. But can honour survive the chaos of conflict, and once unleashed can violence ever be contained?